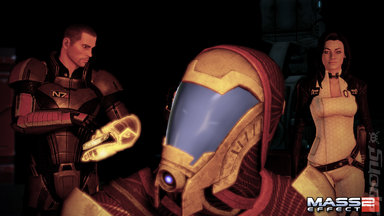 All that Mass Effect 2 downloadable content sounds really nice, doesn't it? Despite the fact that you can't download it yet. Well, it turns out if you buy a pre-owned copy of the game, you'll never get access to that DLC at all.

EA is performing an experiment with BioWare's latest RPG, to tackle the second-hand market. Buying a fresh new copy of Mass Effect 2, either physical or via digital download, will give you access to the Cerberus Network, which is described as an exclusive DLC hub.

You've probably guessed by now, but you don't get access if that copy you've bought happens to be second-hand. Paid-for content will still be available on the Xbox Live Marketplace, but you won't get any free DLC without a specific one-time use code, which allows you to use the Cerberus Network.

If you decide to buy a pre-owned copy anyway, you can still obtain a code – but you have to pay EA for the privilege. There's no word of how much this will cost, but purchases are tied to an EA Online account, meaning you only get one code per user.

As our previous news story detailed, free DLC will involve a Normandy Crash Site mission, armour, weapons and an Umbra Visor – these are to be available to coincide with the release of Mass Effect 2.

This isn't the first time a publisher – or even EA for that matter – has attempted to sidestep the second-hand games market by providing one-time incentives. In the past, these have usually come in the form of a specific weapon or power-up that can be accessed using a code on a card, but the Cerberus Network looks like a concerted effort to ramp up efforts against pre-owned sales.
Companies: Bioware
Games: Mass Effect 2

As long as you can eventually access the same content without having to pay the price of a full new version of the game, then they're not really ripping you off any more than you are ripping them off by buying the game preowned.

However, if anyone prevents me from selling or buying a preowned copy of a game that money has been paid for, that is when it becomes unreasonable, and that's when I'm going to refuse to buy the game. It's not because I'm cheap, though, it's a matter of principle. Ł40+ for one copy of a game - that's reasonable. But if it's only a licence for one person ever, then the value decreases a lot.

Everyone is aware of the benefits of buying a new game. It's just a case of whether an individual personally feels that paying full price is worth those benefits. If not, they're going to either not buy it, wait until the price drops, buy it preowned, or pirate it. The way to change their mind, in my opinion, is not quantity, but quality. If a game bought preowned is purposely limited, the people who would have bought it preowned are still not going to pay full price for it.