We say 'solution' with trepidation 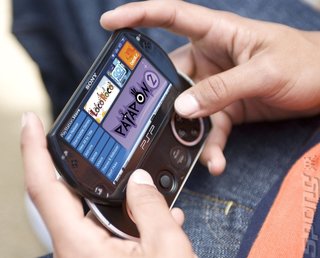 Okay, so you've got a PSP and a bunch of games on UMD but you really, really want to move to the digital download-only PSP Go because you've got some spare cash around. However, you've not got enough cash to replace all your now useless games.

Sony has said that it's got the solution to your dilemma. It's called a 'PSP Go Reward'.

Here's the official line. "With PSPgo Rewards you can download three much-loved, or totally new PSP titles for free..."

That's three games from a list of 17 (see the end of this story for those).

What happens if you own more than three games? And why only 17 in the list? We're on the case. One obvious solution is simply not to get a PSP Go and to stick with your old, disc'd PSP instead.

But er. Sony, I don't think you're doing it -quite- right.

Joji 25 Sep 2009 08:24
2/12
Lol, I held no confidence that Sony was ever going to get even this right. This isn't a solution, its a damn pathetic excuse consolation prize.

Why bother with a PSP Go? Paying over Ł200 for a console with less options seems silly, and with all the retailers boycotting it, I feel its already the walking dead of consoles.

Hang onto youor old PSPs, people. They might be chunker buggers, but offer more content for less price, than the extortionately priced Go!.

headcasephil 25 Sep 2009 08:40
3/12
sony you are crap iv had a psp from the start so have got a load of games 48 to be precise and iv traded my older psps so i could get a pspgo so iv got a load of games that are useless and can only get 3 games on download wich i have to go find a mate to use there psp to log on to ps network all i can say is i think i will sell all my games on ebay and not buy a psp go and get a dsi instead f**k you sony

Joji 25 Sep 2009 12:56
4/12
Man, that sucks. I think gamers that staunchly believe Sony are naive. The reason I think they aren't going to support a better and more reasonable option is because, perhaps they plan on phasing out one of the game distribution lines, further down the road. That gave PS3 BC and then took it away, so I no long believe they want to do right by their customers.

My advice to you, is to get a PSP 2/3k, and take back control of your gaming. PSP Go is going to screw us over.

Riznoy 25 Sep 2009 16:47
5/12
woah woah woah, everyone relax, I don't thinks that's such a bad idea, yea I have a like 15 psp games sitting in my house, but I only play maybe 1 or 2, so I'm going to download 3 games I've never played before and be happy, just look at it this was, you just traded 3 or 4 crappy games that you haven't touched in 2 years for something new, any different from going into a game store and doing it? on top of that, YOU STILL HAVE the old game, so throw it in you old psp and play it., that's my opinion

Joji 25 Sep 2009 19:10
6/12
That's fine if you want to roll over and pucker up for Sony, whenever it suits them. I don't know, perhaps some like being screwed over by Sony on a regular basis. I for one have principals and won't stand for their crap, the same way I wouldn't do it with Nintendo, MS etc, if they tried the same kind of bs.

Three free games might tempt some, but its in no way anything near what you won't be able to access on PSP Go. Each to their own.

Psp Skin 26 Sep 2009 05:58
7/12
Nice game.I like it more.Decal**** features ultra-high resolution, brilliant full-color design that are processed with UV resistant inks on self-adhesive cast vinyl. It is coated with an extra layer of glossy protective film for the ultimate durability. Once applied, Decal**** covers up old ugly scratches, and like a thin membrane, it protects and buffers the device surface from occasional nicks and scratches. Decal**** is not a paper sticker, it leaves no harmful residue when removed and does not void your device warranty. For more details visit us at [url removed]

Wintermute 28 Sep 2009 02:30
8/12
You people do realize that this is just for "upgrading" to the PSPGo correct? This isn't their "UMD Solution" for those of us with large game libraries. Its just a bonus for buying a Go. The actual UMD solution will follow. Man you people really jump the gun when someone doesn't report a story correctly.

Svend Joscelyne 29 Sep 2009 10:00
9/12
Wintermute wrote:
You people do realize that this is just for "upgrading" to the PSPGo correct? This isn't their "UMD Solution" for those of us with large game libraries. Its just a bonus for buying a Go. The actual UMD solution will follow. Man you people really jump the gun when someone doesn't report a story correctly.

The story is reported correctly. It is a solution to the UMD problem because there is no alternative. Sony have recently said that due to legal issues, there won't be a transfer service to move your UMD games to digital. At least, not yet. So for the time being, this is the best we/you have.

Jumi 30 Sep 2009 03:59
10/12
Seriously Sony? This is the best you got? I'm beggining to lose my respect for you guys. First, you screwed by getting a scarce amount of quality titles on the PSP and now I can't play my library of UMDs?

You can't come up with way to transfer? Or do just want us to cough up more money for your god forsaken GO? Iy's like you don't care for gamers expense and satisfaction at all? What happened?

rony1434 1 Dec 2009 14:01
12/12
Hi all.
Guys please help me out.
I am thinking of buying a new PSP having elegant skin soon, So could anyone here please suggest me some websites providing PSP with nice skins?