1980s Spectrum vs Acorn War to Star Tim from The Office 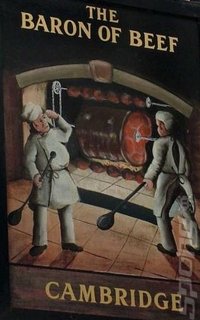 Great locations in UK video game history: #1 THE Pub.
The BBC is to screen a docum-drama-edy based on the 1980s home micro-computer 'war' between Sir Clive Sinclair (of Sinclair ZX 80 fame) and his erstwhile business partner, Chris Curry (of Acorn and hence the BBC Micro).

The show will feature Alexander from comedians Armstrong and Miller as Sinclair, while Tim from The Office (aka Martin Freeman) will take the role of Curry.

While we're sure there will be lots of historical background regarding the time that Curry left Sinclair to form Acorn and go into direct competition with the Spectrum, we're hoping it makes a meal of the 'Battle of the Baron of Beef' - as we're calling it.

For those of you who don't remember that major moment in the good old days of UK video game industry, Sincuser has this reminder: "Having commissioned a survey on the reliability of micros which appeared to demonstrate the superiority of the BBC over the Spectrum, advertisements were placed in two national newspapers on behalf of Acorn, implying that Spectrums bought as Christmas presents would soon be taken back to the shops, and their owners would do better to buy BBC computers instead.

"The advertisement so angered Sir Clive that he attacked Curry in The Baron of Beef, a Cambridge pub where both are regular customers. Sir Clive walked up to Curry and slapped him about the head, then argued with him about the advertisement. There was some shoving and jostling, and the two men later began fighting again in Shades, an upmarket Cambridge wine bar."

Today we're lucky if anybody in the industry would even comment on the speculation and rumour that there was a pub called The Baron of Beef in what may - or may not be - Cambridge.

More info about the show, but not the fight, from broadcastnow.

Joji 1 Jul 2009 14:42
1/3
Interesting. Nice to see something like this forgotten part of the industry. It reminds me of the similar one done for Apple and MS in the U.S. Nothing like a bit of educational historic drama.

Would be nice to see a bit with all those E.T Atari cart being buried in the desert. Lol.

YenRug 1 Jul 2009 15:36
2/3
I have to admit, I thought someone had made a mistake at first, as I always thought the "war" was between Spectrum and C64 owners, with BBC owners seen as posh knobs on the sidelines. Instead it's something I was probably too young to be aware of, at the time, I'll have to keep an eye open on the listings for it.

Jason 23 Jul 2009 11:28
3/3
We've been very much involved with the production of this film. We supplied all the computers and associated props. From what I saw on the monitors during filming it looks like it's going to be a really good film and in the most part true to the original events. We're really looking forward to watching it in the autumn. www.computinghistory.org.uk
Posting of new comments is now locked for this page.