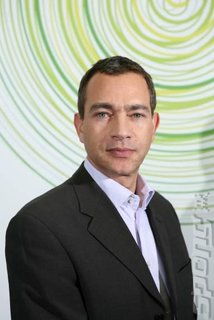 David Gosen
David Gosen, head of European marketing for Xbox (and former MD of Nintendo Europe), reckons the games industry isn't getting enough credit for the stuff it's doing. What it's doing, apparently, is no less than rescuing the High Street and the family unit.

In an opinion piece in this week's MCV bemoaning the industry's lack of respect, Gosen writes, "When we're saving the High Street and bringing families back together again, we should be recognised for that."

Blimey! Marks and Sparks must be ever-so-grateful! As must Mark SPOnG's grandma, who's clearly seeing him more than ever now that he loves nothing more than playing Rock Band 2! Perhaps the games industry should turn its attention to halting global warming next.

OK, as Gosen points out, "(the European games industry) is at about $15 billion revenue depending on whose research you believe" and on the whole the industry is doing well in the face of a global recession. Still, SPOnG would really like to see some hard figures to show that games are "saving the High Street".

Similarly, we've all heard anecdotal evidence (often from games execs, strangely) about families playing games together (Gosen plays Guitar Hero with his teenage daughter), but does this really constitute "bringing families back together again"? Are we really to believe that families normally pre-disposed to ignoring each other and eating microwave dinners in solitude once again love spending time together because they have a copy of Scene It? in the house?

That's not to say, of course, that we don't agree the industry should get a bit more respect. Maybe even the "incentives to drive development within the region" from the government that Gosen and many others want. The games industry does great things - it makes plenty of money and provides great entertainment. But come on, let's have a bit of realism, please...
Companies: Microsoft
People: David Gosen

Seriously i respect the industry not the business.