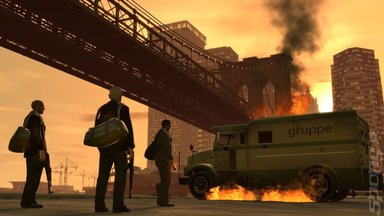 GTA IV: not responsible!
A 16-year old has committed a series of misdemeanours that have been described as a "crime wave" after apparently succumbing to peer pressure on an Xbox Forum.

The one-lad lead "crime wave" wasn't quite on the scale of anything from GTA (which was predictably mentioned several times in coverage by local publication The Norwich Evening News). It constituted Ł10,000 of damage done to vehicles over a 24 hour period in November.

Investigating PCSO (Police Community Support Officier), Bob Hall, said, ?When I spoke to people in the area there was a very strong suspicion about this lad. When I spoke to him he admitted he had done it and said he had been dared to go out and damage cars in an online Xbox club.?

No specific game was linked to the crimes.

Hall was pretty sensible and un-hysterical about the whole thing. ?For Salhouse this was a crime wave - usually there are only one or two crimes a month", he said.

So was PC Ian Kennedy, who also dealt with the case. ?I think it wasn't so much the game but peer group pressure - it was about going out and proving yourself. This was down to the so-called friends he was playing with", he said.

?You get kids egging each other on and we've had that before but not online - but it's about changing communication and now we have Facebook, Bebo, Myspace, it's changing things.?

Despite Kennedy's comments suggesting the crimes were not directly linked to playing games, Norwich Evening News was quick to point out that, "Research released this month by The Children's Society found that computer games, the internet and TV lead to violence and mental illness. The Good Childhood Report found violent images encourage aggressive behaviour when exposure is part of a normal life."

The report also laid blame for violent behaviour, early sex and mental illness on the doorsteps of selfish parents, but the publication didn't seem interested in that. It just reported that the parents of the youngster were "very disappointed".


See another take on the report here.

The teenager in question is apparently remorseful and was referred to the Youth Offending Team for six months, which will see that he makes reparations to those his crimes affected.

We assume that the mainstream tabloids will be running this on Tuesday.