Taking Games Piracy to the Pirates 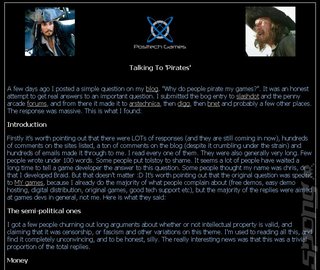 Soon to be SPOnG columnist, Cliff Harris, has a long and respected track record when it comes to developing video games. After working with Peter Molyneux's Lionhead Studios and Will Wright's Maxis, he started Positech games in the UK. These include Kudos and Kudos 2, Democracy (and 2) and Rock Legend.

As largely a one-man operation (Cliff codes and designs his games as well as selling them from the positech website), publishing games for Windows and Mac PCs, he also knows a thing or two about how a company can suffer from games piracy - and this is despite Positech's games coming in at around the Ł10.

So, unweighed down by corporate bullshittery, Cliff decided to go and do something very, very simple indeed: he asked people why they pirate games. You can read his full posting over at Positech, but we'll provide a flavour here.

He covered issues as obvious as 'Money' ("A lot of anger was directed at the retail $60 games, and console games"); 'Digital Rights Management'' ("the extent to which DRM is turning away people who have no other complaints is possibly misunderstood"); 'Digital Distribution' ("Lots of people claimed to pirate because it was easier than going to shops").

Not only that, he also came up with solutions such as never using DRM and lowering prices for his games. His conclusion to the exercise in opinion gauging?

"I'll never make millions from them, but I think now I know more about why pirates do what they do, I'll be in a better position to keep doing what I wanted, which is making games for the PC."

We would urge you to read the entire posting over at Positech.
Companies: Positech

deleted 14 Aug 2008 18:52
1/4
ok so this is to allow one guy to continue making games fo PC? now as more devs make game sfor consoles and consoles are getting more like PC`s doesnt he just have to sit it out?

Even the mighty Nintendo haven't asked this vital question, while considering the option of DS homebrew games. And so long as they continue to do this, I'll hate on them.

We know why Nintendo never mention homebrew DS games and aps, don't we?

Horatio 15 Aug 2008 12:15
3/4
Why do people obtain pirate games? Because they want something (and often everything!) for nothing. All the other stuff like DRM and digital distribution are just excuses for 99% of those doing the pirating.

Frankly, those who say games are too expensive are just using that as an excuse - fine $60 (or Ł30-ish) is a lot of money but the game will be $40 in 2 months, $20 in a year - probably less pre-owned - can they not wait? The answer is NO, they need the games straight away, they need to "own" everything!

I personally think piracy is more akin to an addiction. I know people with the R4 device who have 1000+ games stored, ready for upload to the device... yet they can't possibly have time to play them, and frankly some of the games they have (Dogz!!?) are of no interest to them but they keep getting more, just so they have them. Very odd.

I never understand the industry comments that state they lose Łx billion a year to piracy - how do they get to that figure? Have they added in those 1000 DS games to reach the figure?

I really do feel for all those affected by piracy, especially those artists/developers/creatives who are not backed by a publisher but I'm afraid that little can be done to stop it, not without a distinct change in message and attitude to get people to see the damage done.

Daz 15 Aug 2008 13:20
4/4
I used Pirated games as demo's, If I liked the game I'd save up and buy it for real, however most of the PS games now are getting increasingly harder to find, even more at reasonable prices.
Posting of new comments is now locked for this page.