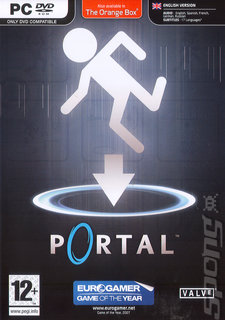 All Images (3) »
A leaked script and casting call for a new Portal game have dished up details on the game's plot. In case the headline didn't give it away, here there be spoilers. If you don't want to see them, turn back now...

It looks like Cave Johnson, the dead CEO of Aperture (the company responsible for portal technology), is set to become the chief antagonist of the next game in the series. Before anyone triumphantly cries "Aha! 'tis a prequel!", we should point out that in the new game he is less dead than he once was.

A leaked portion of the game's script apparently contains Cave proclaiming via loudspeaker to a rookie test subject, ?As of this mornin' yer old buddy Cave has been resurrected inside of a computer. And I never felt better!" So... it would appear that Cave is acting as this game's GlaDOS - the kooky voice-over that drives players through the first game - in some form or another.

"I been thinkin", Cave allegedly says, "Heck, suspended as I am in this inky purgatorium, I got nothin' to do but think. What if them engineers didn't do me no favors pourin' me into a computer? What if they denied me my final reward?"

Sounds like bad news. In fact, it sounds suspiciously like this might be what prompts him to ?lose his grip on humanity? and go ?from sidekick to principle antagonist?, as revealed by a casting call for an actor to play Cave. You can read more details in the image below. Take a look at the portrait of Cave while you're at it.

That a new Portal game is coming is no secret by now. Back in February the game's lead designer, Kim Swift, said that Valve's marketing director, Doug Lombardi, had announced the game. No formal announcement had, in fact, been made. The game's lead designer saying it exists is enough for SPOnG, however.

SuperSaiyan4 11 Jun 2008 10:48
2/3
Portal was and is definently a very interesting game as its a puzzle game I kinda enjoyed it on the Xbox 360 with Half Life 2 Orange box was playing it for ages until I got stuck lol.

mrAnthony 11 Jun 2008 11:25
3/3
i got stuck on chamber 18, on the part where you have to catapalt yourself through various platforms getting higher and higher. i just didnt think id be able to do it. then my girlfriend just said "NO you CAN do it, just keep trying" after about 45 minutes we managed it. and finished the game soon after.

this, resident evil 4, and mario galaxy, are probably the only games me and my girlfriend have played through together and it made it such a better experience, like you are in it together. one of my favourite games, actually, because of the experience, and just how inventive it is.

me saying a what is essentially an fps as one of my fav games ever....?? it must be good. im LAME at fps's.