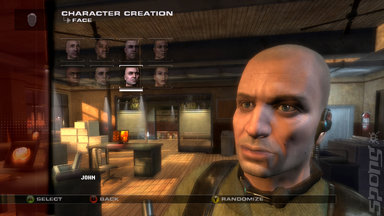 The research, carried out in cahoots with 'new media research' company Interpret LLC used two groups of gamers using Xbox 360s and PCs. One group didn't see the ads. The other did. The games used were, Major League Baseball 2K7, Need for Speed Carbon, NASCAR 08 and Rainbow Six: Vegas. The ads used came from a sports equipment maker, a fast-food chain, a movie release and a sweety maker.

According to data released by Massive the results included:

* "73 percent of gamers recalling the ads agreed with the statement that "the ads enhanced the realism of the game.'"

* "Across all game genres and advertisers studied, the research revealed that an average of 70 percent of gamers agreed with statements that the dynamic in-game ads 'contributed to realism', 'fit the games' in which they were served and looked 'cool'".

* "56 percent of exposed gamers agreed with the statement that the ads made the gaming environment feel more interactive."

Disclosure: We've cherry picked here mainly because we are astonished that an advert can make a game look cool or that they enhance realism. Then again, here at SPOnG we can be quite set in our ways at times. What do you think of in-game ads and research carried out about in-game ads by companies making their money from selling in-game ads? Tell us in the Forum.

Oh for heck's sake! Thank you Daz. I think I invented some kind of Peugot/Microsoft hybrid.

SuperSaiyan4 4 Jun 2008 12:00
3/12
Ads mean nothing its the game itself that means everything, when you're playing a game you dont go looking for ads sure you might see one and go 'oh thats interesting' but it does not effect the gameplay which is key.

If ads hinder the gameplay by keep showing up all over the place then its becomes an annoyance.

Personally I dont know who they asked on how ads can have an impact but it must have been Microsoft and paid them as in no way ads make a game more 'realistic'.

OptimusP 4 Jun 2008 12:55
4/12
"and research carried out about in-game ads by companies making their money from selling in-game ads? Tell us in the Forum."

Just that fact should make everyone's critical thinking alarm go off. Not that the research could be wrong, just that it needs to researched itself before you take the numbers as valid (which it still could be).

schnide 4 Jun 2008 13:01
5/12
In-game ads are both sad and inevitable, particularly for online games where they can be refreshed ad-infinitum (no pun intended).

For sports games you can just about argue that they don't matter so much, since having ads is just recreating what the experience in real-life is like. You're going to take in those ads in the same way.

However for anything else, it ruins the experience and is selling out. Let's take an FPS shooter set in a dark cityscape. You're walking through an alleyway chasing a criminal and turn the corner to see a billboard. If it's a fictional advertisement, and particularly if the fictitious company relates to the storyline, then all well and good.

But if you happen to see an ad for a real-world brand then it reminds you of something in the real world, and takes you out of the fictional one that the designers have (hopefully) tried so hard to pull you into.

Did anyone manage to watch the end of Casino Royale and take in the full emotional pull of Bond calling Vesper a bitch, who he so deeply loved, instead of noticing the big Sony Vaio laptop, as well as the Sony digital camera he uses? Not me. Using ads out of the storyline context in this way is going to compromise artistic integrity in exactly the same way.

You go the flicks to escape tv....WTF!? Same for games, it has the potential to break the gaming experience.

Joji 4 Jun 2008 13:30
7/12
Ad placement in films, you only see for a second or two, doesn't detract from the experience, because films are passive. However, there are times when ads have stuck a product in my mind for ever.

Last time this happened to me was with Back to the Future 2, where McFly flashes those self lockable Nikes on his feet. I still pray Nike release them sneaks to buy.

This is the way in game ads should be, buy using the product or product name, but spinning it with a unique twist to us, while still being noticeable, but not being intrusive to a game. If they want success that way, I have no problem with it.

If in-game ads bring the price of a game down, I'd not really have a problem. What I'm hearing however, is that "additional revenues will be put into developing richer and even more immersive gaming experiences going forward."

Oh please! Call me cynical [No, we're not reading this - Everyone], but for as long as publishers can sell games at the price they're already selling them at, they will continue to sell them for the price they already sell them at. This is far from altruism on anyone's part.

If you're suggesting that there's enough revenue in in-game advertising to release certain titles at a budget price, I'd counter with the suggestion that the amount of advertising that would have to contain would be so great that it would detract from the title itself, it's reviews, and therefore potential sales.

Saying that, there's probably enough of the Playstation demographic to make a success of, say, GTA IV: Burberry Edition...

Nike presents GTA 4: Back to the Future feat. the VaioLorean

Steviepunk 4 Jun 2008 16:02
11/12
schnide wrote:
For sports games you can just about argue that they don't matter so much, since having ads is just recreating what the experience in real-life is like. You're going to take in those ads in the same way.

It's all about context, as you point out the ads will sit well in sports games and likely have the same effect that they do on the TV. It could also be said that some of these games could be 'better' for it - I know plenty of people you love the FIFA games, these people are not gamers as most people here are, but they think FIFA is great because it looks like football does on the TV and it's them doing it, game play seems to have little to do with it :( So in their case, real ads = better game.

schnide wrote:
However for anything else, it ruins the experience and is selling out. Let's take an FPS shooter set in a dark cityscape. You're walking through an alleyway chasing a criminal and turn the corner to see a billboard. If it's a fictional advertisement, and particularly if the fictitious company relates to the storyline, then all well and good.

As I said, it's all about Context. If your FPS shooter is a futuristic one and the billboard has an advert for someone on TV this week, then it will look odd, however it's a 'present day' shooter, then the Ad would not necessarily look out of place.

What you also need to consider is that most people on this site would fall into the 20% bracket of dedicated gamers, while advertising is mostly going to be more effective targeted at the 80% of gamers that fall into the 'casual' market.

As an example, my website has a fairly tech and web-savy audience and the ad click-through rate is around 3%. At the times that I get a link through from more 'casual' source (such as an AOL feature page), I see ad click-through go up to as much as 20%. If was running a website for profit, which demographic do you think I would go after? ;) I'm sure the same would apply to in-game advertising as well.

PreciousRoi 4 Jun 2008 16:28
12/12
Cosign most of what you just said. Since adverts in some videogames appear to be inevitable, I'd like to see ones that blend seamlessly into the game.

Also, variety is key. If every advert in a game is from the same short list of products/compaines, its unrealistic and glaring ...only oossible exception being a videogame based on Demolition Man...in which case all advertisements are for Taco Bell. Hell, I even find it slightly annoying when fake adverts are too repeptitive.

I think its inevitable that some people are going to do adverts wrong...we can only hope that the games they diminish by this aren't very good to begin with.