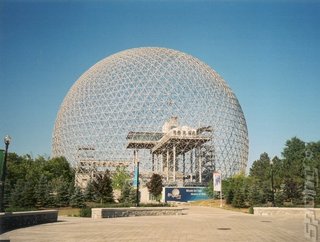 Montreal is full of buildings built by extraterrestrials.
Tomb Raider and Hitman owner, SCi is to relocate its development operations to Montreal... that's Canada in case you have no sense of geography.

Packing for the trip across the ocean will be made a great deal easier, however, because the company has also canned some 14 as yet unnamed 'projects'. Buying tickets for the trip is also going to be a great deal less expensive as well, with 270 people losing their jobs - that's 25% of the staff.

Speaking about the reasons for the culling and move, SCi's CEO Phil Rogers - who replaced Jane Cavanagh last month, said, "Our quality has slipped below acceptable standards".

In a phrase that might ring slightly hollow to the 270 people now sitting in the pub looking for jobs in a local industry that has recently been framed as 'small business' by the UK government, Rogers pronounced, "I am confident our staff share this vision and excitement for the future, and determination to build a working environment where our innovation and creativity can be commercially realised".

The cuts and sackings (or redundancies or down-sizings or re-alignings of the workforce, or whatever other euphemism is currently in vogue) are intended to gather some Ł50m to make up for the 'writedown' of just under 80 million pounds incurred due to the project and people canning.

The restructure doesn't stop there. According to MCV, "the firm will now set about a 'fundamental change in business structure' which involves decentralising control of its development studios, creating a new label called Eidos PLAY which merges its casual and new media resources".

So, how about a take-over? "At this time the board is not encouraging offers for the company..." said a statement from SCi. The statement also, confusingly continued,"...but, in a consolidating industry, a sensible offer will be considered". That second bit sounds remarkably encouraging to SPOnG.