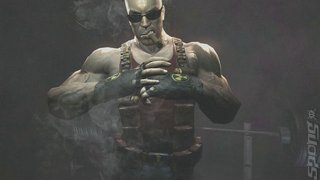 George Broussard, the president of 3D Realms and co-creator of Duke Nukem, has apologised for misinformation that has spread across the internet indicating that the long-awaited Duke Nukem Forever will be released this year.

While doing this, he also managed to slip in what looks like a complimentary statement about the video games press. We can't be sure though... as we don't really know what these are supposed to look like.

In a posting on the 3D Realms forum?, Broussard said,

"In what appears to be an unfortunate turn of events, there seems to have been some confusion between what was 'off the record' and what was not. I suppose we're used to dealing with gaming press and not mainstream press. Lesson learned."

The article Broussard is referring to was published by the Dallas Business Journal?. The Journal reported, "Garland-based video games developer 3D Realms has said Duke Nukem Forever, the highly anticipated sequel to its revolutionary 1996 PC game Duke Nukem 3D, is projected to be completed in late 2008".

Broussard added, "While we have internal targets, dates and goals, like every developer, we are not ready to share them. What's amazing about this is that the DBJ must have assumed that we'd actually announce a date to them, and not gaming press, and that even in the light of Scott's quote of 'We can't make an official announcement.', the DBJ effectively did that. Lesson learned.

"The release date is still 'when it's done', and will be until the appropriate moment."

The Dallas Business Journal also quoted Scott Miller, owner of and partner at 3D Realms, as saying, "We haven't formally announced any platforms for DNF. But, of course hitting the big three makes the most sense (PC, PS3, 360)."

Broussard responded to that, "Platforms have not been finalized or announced. You can rest assured that we are moving toward a goal and that the recently released teaser trailer is the start of that process and seeing more of the game, sooner than later".

Broussard concluded by saying, "We apologize to gamers and websites everywhere for this series of events. Sometimes, you can be too trusting of people and assume things that come back to bite you. Lesson learned."

The DBJ has responded with an article± noting Broussard's apology but essentially denying it was at fault. It reports, "The audio recording of the original interview with Miller, makes no mention of information being 'off the record'".

Okay, what Broussard could have been saying then was, "The gaming press knows how to behave itself when it is told to. What's with this mainstream media?"

The DBJ has, however, modified its original article to include the following quote from Scott Miller, "We can't make an official announcement. Frankly, we may miss the mark by a month or two, but I feel very confident that we're on target this time. It's definitely an internal push".

It is worth noting that while the DBJ claims it has an audio recording of the interview in which Miller said Duke Nukem Forever would be out this year, the quote attributed to him relating to platforms is reported in the DBJ's original story to be part of an email exchange. This does not, of course, mean that there was necessarily no audio interview, but it's worth baring in mind that the DBJ is sending out mixed messages.

When all is said and done, however, off the record or not - 3D Realms would seem to believe that Duke Nukem Forever will be out by the end of this year, give or take a few months.

Bentley 8 Feb 2008 16:12
1/3
Ah, Duke... what fond memories I have. Back in my university days, pre-broadband, when I still had hair and some hope that the world would be a better place in the future; my neighbour and fellow student GrahamJackBob would shift his entire PC setup over to my house and we'd play head-to-head Duke 3D using my home-made serial cable. It was so long ago, the other games we'd play were Doom and the Quake 1 Beta... What a joy it was, to jetpack to the ceiling of a room, drop a hologram of Duke to the floor, and wait in the air for my foolish opponent to come in and start blasting my false image; and then I'd drop down behind him and shotgun him in the arsehole. No other game has allowed me to do that since, and it was bloody great.

There was also a giant, spinning level, and I used to love the spectacular brain-maths involved in shooting a rocket from the centre of the level to the outer rim while GJB stalked around the outside; watching him running around as my rocket slowly edged closer and closer until BOOM... a spray of Duke-meat and gibs; a spectacular long-distance slow-moving rocket shot from the centre of a spinning disc right on target on an oblivious moving opponent... oh, I cannot convey the satisfaction. But I remember those kills as if they were yesterday, and I learned skills that I have carried with me through every FPS since. So bring on The Duke; I just hope the multiplayer is as full of innovation today as it was back then. It's just crazy that it has taken so darn long...

But for now we have to trust them, and hope it's literally perfect when it's finished. If not, then we can criticise them about it later.

Agreed, but it only took Michelangelo from July of 1508 to October of 1512 to paint The Sistine Chapel Ceiling.