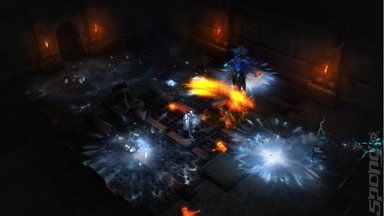 Diablo III: Reaper of Souls - Ultimate Evil Edition is hitting nearly all the consoles (no Wii U) and it's hitting them with all of the content from the original Diablo III, plus some new features and updates from the Reaper of Souls expansion.

This is happening on August 19th, and the pack comes with six customisable character classes, five acts and four-player local (same-screen not LAN, obvs) and online multiplayer via Xbox Live or PSN.

The blurb explains that, "The Ultimate Evil Edition introduces even more ways for players to share their adventures. A new Apprentice mode boosts low-level players' power while adventuring with high-level friends, making it easier than ever to play together. Players will also be able to share treasures with other players on their friends lists via an in-game mail system, including mysterious Player Gifts containing rare loot for the adventurer whose name they bear."