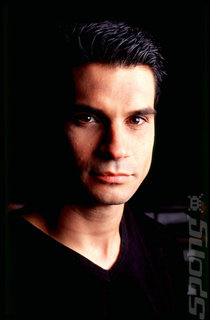 Tommy Tallarico
SPOnG took the chance to interview video game music creator, Tommy Tallarico, during London Games Week. During the extensive, 7-page interview which covers the past, present and future of gaming, the maestro also provided insight into the mind and working practices of Shigeru Miyamoto during work on Metroid Prime:

"What Miyamoto did was say to me, ?Look, forget about all the visuals and everything else ? I want you to just make really awesome sounds. Really awesome weapon sounds. I don?t want to give you any direction at all, I just want you to make it sound cool?. Then what the development team did was take my sounds and they created a lot of the weapons around my sound design."

Find out more about Tallarico and how games music and audio makes great games into classics by reading the full interview by following this link.
People: Shigeru Miyamoto Tommy Tallarico

Most. Obnoxious. Host. Ever.

Most. Obnoxious. Host. Ever.

Cripes, Roi - can you give a little detail?

Tim
Off to Vegas For My Not-Birthday

PreciousRoi 24 Oct 2007 17:31
3/7
"Electric Playground" and "Judgement Day" two video game review shows he did back in the late nineties-early oughts.

Tommy as the (just barely short of over-the-top) quirky complement to a straight man. He obviously was having lots of fun making the show(s). Something about the guy just made it all too painful to watch, yet it was impossible to turn away. Most frighteningly, I think thats the effect they were going for...you always remember the most obnoxiously bad commercials, for example. In person, I'd prolly get on well with the guy, but on a television show it makes my brain hurt.

The Absinthe Review Network 24 Oct 2007 20:20
4/7
I have memories of Tommy saying every damn show of Judgement Day "the _____ in this game was AMAZING!" Ok, so the reviews weren't too great and Tommy was a little annoying, but it was in a funny, entertaining kind of way. Well, at least he didn't hold back when he found a gripe with a game. There are so many gaming publications that downplay a games problems like absurd tedium or an idiotic exclusion of a jump button if the graphics are nice or it has good storytelling...

...if Tommy had a new show it probably wouldn't be good, but I'd watch it anyway.

PreciousRoi 25 Oct 2007 00:51
5/7
Ugh, just had a flashback to another one of Mr. Tallarico's personal foibles...any time they did a hardware review, whatever it was invariably found its way down his pants.

tyrion 25 Oct 2007 07:49
6/7
PreciousRoi wrote:
Ugh, just had a flashback to another one of Mr. Tallarico's personal foibles...any time they did a hardware review, whatever it was invariably found its way down his pants.
See that's why he should be doing a show now, let's see him do that with a PS3 :-)

PreciousRoi 25 Oct 2007 20:33
7/7
perhaps not, but you can bet the new DualShock would be right in there.
Posting of new comments is now locked for this page.