We all love the Summer - just not to play games in. 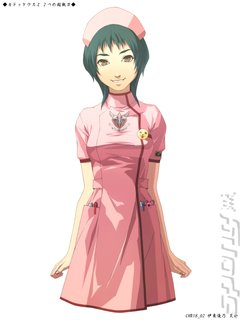 Trauma Center: Some trauma... some centre... Grrr!
What does that even mean?
Let?s put this simply: Nintendo rules the UK All Formats Charts once again this week. However, attempting to defend other formats Activision?s movie tie-in, Transformers maintains its positions atop the 40 from last week. Sure, it?s available on all formats excluding PlayStation 3, but we like to think that it?s being all heroic against the dominating force. We also like to think that all trees should be made of chocolate and there should be four divisions in English football called Division 1, 2, 3 and 4.

The reality is that Numbers 2, 3, 4, and 5 in the charts are all Nintendo exclusives in the form of Pokemon Diamond, Wii Play, More Brain Training From Dr Kawashima, and Mario Party 8. Big ups to Nintendo for Mario Party?s strong showing having had to pull the game briefly to remove the word ?spastic? for the UK release.

Stopping the flow of Nintendo exclusivity at Number 6 is the Wizard King, Mr H. Potter and his puzzle game involving the placing of mythical birds in the correct sequence: Harry Potter Orders His Phoeni or somesuch? (is 'Phoeni' actually the plural of 'Phoenix' or is it 'Phoenixes'? Answers to the Forum please.)

And that?s it, we?re not mentioning any more movie ties-in such as the cute/execrable Surf's Up which, at Number 11, is the highest new entry to the Top 40. Nor will we mention the slightly less upsetting Number 12 Pirates of The Caribbean: At World's End.

(Isn't it about time there was a 'Tie-In Chart' for films and comics and an 'Original Chart' for, well, original creations? Yes, it is time.)

Who would have thought, back in the olden days when video gaming was all about thrashing balls against walls or zapping fast but thick aliens (and only your little brother and sister played Operation with weekend dad) that a game based on surgical combos would smash into the charts at? ok, it is only at Number 17 ? but at least it?s a new entry into the Top 40. We looked for more but we couldn?t find any.

People! All this talk of violence in video games, or video games as art! Just who is kidding who?

So, what?s to look forward to? Well what with the soccer-kicking season having started for the glory-hunting, bandwagon jumping, glamour ?leagues? (as well as the real life Leagues 1 and 2) Premier Manager 08 on PS2 & PC is to look forward to and it?s out on Friday.