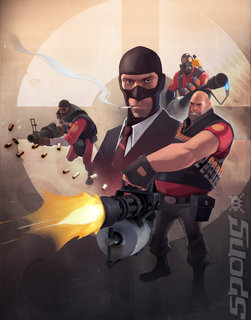 Valve has told the world that Team Fortress 2, the multi-player component of Half Life 2: Episode Two, is "?really moving along in development".

In a message released through gaming download and community site, Steam, the developers added:

"Things have reached a point where people start getting pretty antsy around the office as we get closer and closer to the 6:00 p.m. playtest session.

"We will be sharing more information about TF2 over the next couple of months, and we'll make sure to point that out to people here."

They'd bloody well better be moving along with things, as far as SPOnG's concerned. EA quietly slid news of Half Life 2: Episode Two's schedule slip into an innocuous press release about the different game bundles last week. With the Episode Two, along with its pack-in games TF2 and Portal, already having slipped twice SPOnG doesn't want to see any more delays.

Valve was also good enough to release the above start-up screen for the game. It's not quite the same as having been able to enjoy Episode 2 over Christmas, though, is it?