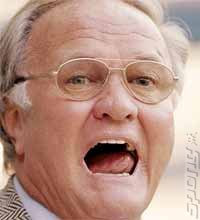 What's Ron with this picture?
Fans of Football Management games will be happy to hear that there?s not one but two new free demos just released on the two leading titles in the popular genre, Eidos? Championship Manager 2007 and Sega/Sports Interactive?s Football Manager 2007.

If you are a fan of the genre, then you probably already know which one of the two titles you are going to be picking up this season, but if you are on the fence, then it?s probably worth having a gander at the two demos to see which you prefer.

You can get the Champ Manager demo (developed by Beautiful Game Studios) from the game?s website at CM2007demo.com which weighs in at 127MB and lets you try out six months in the English, French and Italian leagues. You can even play it in French or Italian if you want to try to improve your language skills at the same time!

The demo of Sports Interactive's latest labour of love (and the studios first under Sega?s wing) can be downloaded from SIGames.com. It?s available in a couple of different sizes for Mac and PC, and via a trillion different mirrors. Well, quite a few anyway.