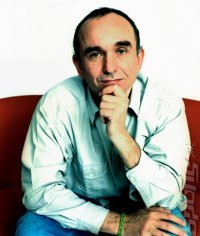 Peter Molyneux, ruminating
Peter Molyneux semi-officially kicked off proceedings at this year?s GCDC in Leipzig yesterday, giving a keynote presentation to over 400 assembled developers, entitled ?Combat: Time to Evolve? focusing almost entirely on how to improve combat in videogames.

Overall, he was urging developers to look towards highly stylised/dramatised combat in classic movies for inspiration, instead of real-life, comparing Kill-Bill footage with a video of a real-life-roleplaying fight and exclaiming that: "Real-life combat is rubbish."

Well yes, of course it is, especially if you are dressed up in a tight velour elf costume wielding a rubber sword.

Molyneux next moved onto the role of environments, pointing out that movie fights rarely take place in flat arenas, using the example of the well-known spiral staircase fight scene from Robin Hood: Prince of Thieves to illustrate his point. The range and type of moves available to players should be determined by the space available to them within the game, as well as the various interactive objects and environments surrounding the player.

All fairly common-sensical stuff you might be thinking, in retrospect. The fact is that games developers do need to be educated about how to dramatise combat in better, more accessible ways, which essentially is the main gist of Peter?s argument.

Perhaps the most interesting part of the presentation was the QA session afterwards, where Peter was asked how these ideas might be implemented into games making use of the Wii?s motion-sensing controller, eliciting the response: "If you wanted to make a big difference, where's the best place to make that difference? I think the controller is definitely it. There's no doubt in my mind that controllers are changing, and they're changing really fast."

However, laconic as ever, Peter has his reservations about Wii it seems, telling the audience: "I'm an incredibly lazy person when I play games, and actually slouching back on the sofa, playing on my beer belly, is my most comfortable position. When I have to get up, it's painful. I make noises and start grunting."

Yay! A lazy developer who tells the truth about how most people actually play videogames - slumped on the sofa with dribble coming out our mouths, through intense concentration on the virtual fantasy worlds beyond the screen.

Peter went on to urge developers to look for a "creative medium [with motion-sensing]?It's not turning a controller into a sword... You cannot do it for 20 hours.?

To be fair, SPOnG doubts that there are many developers who will be creating a Wii game which involved a 20 hour long sword fight element, as that would clearly be commercial suicide (Sega's infamous Desert Bus game springs to mind here!), but Molyneux's point about using the Wii controller is a valid one.

Let's be clear though. This is hardly, as many sites seem to have reported, Molyneux 'knocking' the Wii. We might refer to the tendency he alludes to as 'new controller fetishism' - the inclination for developers and gamers alike to become overly excited about the possibilities of a new controller (this, of course reaching its zenith of late with the Wii) at the expense of thinking about how to incorporate new methods of control into tried-and-tested game designs that work.

Twilight Princess, in this regard, is of course going to be the first great 'test' of the Wii - to see if it can do the business and deliver the sublime Zelda experience we, and the Nintendo faithful worldwide, are praying it can.

in reality, i wonder how many games will have you constantly waving the thing. It 's actually compareable to using a mouse. People that first used one in the 80's, also thought they had to shake the thing all over the table, while in reality, you have to move it no more than a couple of inches to cross the screen. Of course Wiimote is 3D, not supported by a table or desk, but still. How many games in my current library COULD use these types of constant gesturing with the wiimote? Maybe 10%? Scratch all FPS, all puzzle games, all racing games...

so sports and sword games, fair enough. I also would like to know where Molineux ' scepticism came from all of a sudden, after applauding the controller in the past.

Joji 23 Aug 2006 11:51
2/8
I understand what Peter is saying and the best example I can use is Resident Evil 4. RE4's use of action prompts at certain times is similar to what he's saying.

However while fights need to be more dynamic and such it will take time for developers to bother going this extra mile.

Enter the Matrix tried a different style of fight sequence which looked interesting but wasn't enough to save the game from diredom. The question is do we want more games to turn into something similar to Tekken, where you have so many moves and its all fighting or do we want adventure, that gives you fighting cut down with more focus on the adventure.

Ball is in developers court there.

As for the Wii controller stuff, that's up to the brains of developers to come up with something great to use. We await more than sword and gun games.

For example- Remember when someone came out with that mat that you were expected to dance and jump around on? What the hell ever happened with that thing!?

OptimusP 23 Aug 2006 12:49
4/8
And now we see more and more that Molyneux is indeed stuck between "developer that wants to do something really new" and "MS pr-monkey".

Really, he wants a fighter that's easy to learn but hard to master with enviroments playing a bigger role and stuff and more drama...It's like he lived in a some kind of other dimension for 5 years, a dimension where Super Smash Brothers never released.
Easy to learn? check
hard to master? check
Enviroments play big role? Much bigger then any other beat-each-other to pulp game
has realistic fighting...Nope
uses a crap load of randomness...Double check (ok he didn't add that...but c'mon beating up princess peach with a lightsaber as Pikachu is SO FUN!! Can't wait to trow pokeballs as Snake against TP-Link...Snake trowing Pokeballs!!)

Peter, you don't have any friends or something?

Also, the counter Wii-arguments are of a stupid fanboy level. Yeah 20 hour straight arm-movements! Bullocks. Yeah gamers-are-drooling-lazy-idiots-argument! I demand a round of donkey Konga against this guy!
Seriously, the Wii-mote is actually about WRIST-movements. You can just sit there like a idiot on your sofa, rest your arm on your leg and just wave the damn thing with only wrist-movements.

i give it 2 years before Molyneuw actually leaves MS and Lionhead because he felt he sold his soul.

LUPOS 23 Aug 2006 13:51
5/8
Having played a fair amount fo the Wii games on offer at E3 i can safley say that the constant arm swining will NOT be an issue. Unless you are playign warioware or redsteel, where you know arm swinging is required, most players will look a bit like this...

...atleast the balding 40year odl fat ones... who of course wear sweat pants.

As for steering in an fps it takes very little wrist movement to move alot, and the ocasional nunchuck shake is also very mild.

The system is capable of sensing broad sweeping movements but i doubt most games will require it as its also capable os sensing very mild movements acuratley. Really is dependant on what works best for the game and what the audience is interested in.
_________

im lazy, but not when it comes to having physical fun - im quite enthusiastic and active then, plus alert. sports, video games, sex etc

being tired, thats a different kettle of fish. i only mong out playing games when im tired. and im usually no good at them then. if im having fun and im fully awake games dont have this festering vegetative effect on me that seems to be referred to when discussing the cons of the wiimote

PreciousRoi 23 Aug 2006 15:23
7/8
OptimusP wrote:
And now we see more and more that Molyneux is indeed stuck between "developer that wants to do something really new" and "MS pr-monkey".

Can't just have been giving his true and honest opinion?

And as to wiimotecounter arguments, I don't bother with them, I mean why? Until the market gets a hold of it, Pro-wiimote arguments are similarly fanboyish in nature, if not more so. I really don't have too much of an axe to grind on this one, I'd love to see the wiimote succeed, but I wouldn't bet the farm on it just yet.

I'm a bit unsure of the wiimote right now. I'm not sure I like the idea of using it in Zelda the way they've said recently.
I thought the E3 set up sounded good. Almost.
Also
I'm wondering how sensitive it really is or at least how much of that developers use.
I remember some of the early N64 games that were dire to control with twitchy or stodgy analogue controls.
I'm expecting something similar but I hope not.
Posting of new comments is now locked for this page.