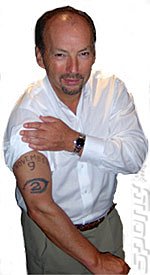 You can say what you like about Microsoft, but they certainly know how to put on the old razzle dazzle.

Experiencing today's pre-E3 media briefing at Hollywood's infamous Grauman's Chinese Theatre - home to the hands & footprints of the Hollywood Stars and, for many, the spiritual home of Old Hollywood - was, in SPOnG's opinion, very much like seeing an amazing tinseltown blockbuster. Incredibly breathtaking and mindblowing (dude!), at least for the short time that it lasted. Then an hour or two later, we must admit that we felt a little bit flat.

Announcements which seemed awesome when delivered to your eyes in retina-burning high def, accompanied by Peter Moore's non-stop sales patter, seemed merely 'not bad' or 'yeh, quite interesting' when discussed with friends over the road at the swanky Roosevelt Hotel's poolside drinks reception afterwards.

Overall, and unlike the Nintendo and Sony conferences earlier in the week, this event was much more of an experience - a full-on, high definition, surround sound attack on the senses. Games wise we got Gears of War, Crackdown, Alan Wake (yes! A game called Alan!), Grand Theft Auto 4 with an episodic content future dripfeed promised, Japanese RPG Blue Dragon, Fable 2, Forza Motorsport 2, Bioware's Mass Effect, Too Human, Rare's cutesy Viva Pińata and, of course saved till last - as any great showman will teach you to save your biggest trick - the first footage of Bungie's Halo 3.

SPOnG walked out of the auditorium, slightly stunned. Before we knew it, we had been shunted zombie-like across the stars' hands and feet outside and across Hollywood Boulevard with the rest of the press hordes to the aforementioned drinks reception at a swanky hotel. Every one of the games listed above, and many more, will be on our 360/PC wishlist at some point in the very near future (or the medium term future, in GTA4's case - sorry guys, we have to wait until late 2007 before we see anything on that.)

And whilst it started off in a fairly predictable manner - with Peter Moore on stage showing off the big fat guns of Gears of War and going on to unveil a big, white GTA4 tattoo on his left arm to match the Halo 2 one on his right (with the accompanying dig at Sony's Phil Harrison's masculinity - "some guys have ducks, some guys get tattoos!"), Moore's presentation soon developed into some interesting, and somewhat unexpected, hardware and Xbox Live announcements, plus a rare E3 audience with non other than Microsoft big cheese nerd himself, Bill Gates.

As we predicted some time back, Moore also rolled out a load of new Xbox Live Arcade titles including Mizuguchi's Lumines Live music puzzler (with licensed Warner Bros. music and video) and a raft of classic titles from partners SEGA, Namco, Konami and Midway.

Let's take a quick hop and a skip through the top games on show, which we'll have full screens and assets up for shortly. Unlike the showman Moore, we'll start with the best and most-anticipated first (just as we do with our Christmas pressies). A trailer to Halo 3 played out as Messrs Moore and Gates left the stage at the end of their presentation, much to the whoops of delight from the fanboys in attendance. It was of course spectacular, but SPOnG felt it didn't really show anywhere near enough about the game, which we'll endeavour to find more about on the showfloor later today.

Then the next 'big' and fairly unexpected announcement, GTA4. No game details or assets were shown, only that the game would be out on 360 on day one (i.e. is not exclusive) and that Microsoft and Rockstar have signed a groundbreaking agreement to release further game content in episodic form over Xbox Live. We will endeavour to find out more about Sony's plans for GTA4 as soon as we get to quiz Rockstar about the deal. All you need to know now is that the game is out on October 19th 2007.

Gears of War, the show's impressive opener was, as we said, in turns awe-inspiring and almost too much of a sensory overload. It is going to be an essential game for any FPS fan. It will undoubtedly help Microsoft shift the number of 360 consoles it needs to reach its stated target of ten million next gen consoles on the market - all before Sony and Nintendo are even off the starting block later this year.

Remedy's Alan Wake was, for SPOnG, the most interesting looking title on show. The trailer for this psychological thriller, set in some hick town called Bright Falls, succeeded in putting it up near the top of the list of essential games to look out for on the showfloor.

Hardware-wise, Microsoft unveiled the Xbox 360 HD-DVD drive for the first time and confirmed its Christmas 2006 release date, with Moore noting that it's also a 'bargain' compared to 'other offerings' (i.e. Sony's Blu-Ray). Sony insists that Blu-Ray is Hollywood's format of choice and with the level of support it has compared to HD-DVD, they may have a point. Perhaps the next generation home cinema war is where the next gen gaming war is actually being fought out, despite both companies insistence that it's all about the games. Let us know what you think about HD DVD versus Blu-Ray in the forums below.

There were also details and pics quickly shown of a wireless force-feedback 360 steering wheel, a camera and a headset.

Finally, and the biggest surprise of the day, Microsoft's chief nerd Bill Gates ambled on stage to tell us all about his company's world domination plans. And boy, were we pumped! The plan is to fully converge Windows Vista, Xbox 360 and Windows Mobile platforms to enable gamers to play with their friends wherever they might be - at home, at work or on the move. This is all being packaged under the banner of "Live Anywhere". See what they've done? There are over one billion mobile phone users worldwide, and over 320 million MSN messenger users It's Microsoft's plan to entice these people into playing Xbox Live games with their early adopting friends.

With this in mind, SPOnG feels a little deflated with regards to what we heard from Nintendo earlier in the day. Who needs to talk about 'growing the market' for non-traditional and casual gamers, when Microsoft, in many ways, already has that market at its fingertips?

Clever demonstrations of Live Anywhere functionality were the ability to do straightforward cross-platform game invitations, to see what friends are doing on their other platforms (i.e. seamlessly integrating Xbox Live with MSN Messenger.) Plus, using the example of Forza Motorsport 2, we were shown how you might tweak your car's performance on your mobile, design your own decals on Windows Vista, and play the game on your Xbox 360.

The system was also demoed using Shadowrun, with a 360 gamer playing against a PC gamer. SPOnG found that it's mouth was involuntary hanging just a little bit open in agogglement at this point. We've just been shown the future of videogames and it sure ain't a funny TV-remote-alike controller that you wave around the place.

Well, SPOnG hopes there's room in the future for both forms of entertainment we've seen on offer today - the cutesy toy on offer from Nintendo and the hardcore, play-anywhere play-anyone high def future on offer from Microsoft. Christ, it's a good show!

Oh and Mr Moore, SPOnG definitely thinks that GTA4 Tattoo you are rocking is a fake. Prove to us that it isn't.

Pistolman 10 May 2006 16:30
2/10
I think that MS had a really solid presentation but all these macho, tatoo, blowing stuff kind of things begin to bore me.

And how is Live anywhere going to expand the market?
I only see it as a means for pc users to play against xbox users.

Patmos 10 May 2006 17:45
3/10
So I can make things on my PC and send them to my X-box360, well thats endgame right there gentlemen. Imagine if you will, the ability to build custom Halo3 levels import them to the marketplace for all to play, giving consoles the last thing PC have, a mod community, user created content. Hell you might even be able to sell your levels and generate some serious cash. and microsoft scims off the top, and players get a constant flow of free to cheap user content (granted only about 2% will be good, but all you need). Also the ability to buy Zuma and other x-box live games and also get to play them on your mobile phone and computer withour repaying is awesome.

tt_rage 10 May 2006 18:23
4/10
I'm not sure why this "multiplayer over multiplatforms" is considered such a big deal. The idea has been around at least since Dreamcast Quake 3 players were getting their backsides handed to them by PC owners.

The content creation idea is great, need more details though. Problem is, rule out mod-making, it requires possessing knowledge about a system MS does not want out there

Bentley 10 May 2006 20:23
6/10
Aaaaargh, there is that term again: "episodic content". A fancy way of saying "why should we sell you a complete package for a fixed sum, when we can slowly bleed you over a period of time?"

The content creation idea is great, need more details though. Problem is, rule out mod-making, it requires possessing knowledge about a system MS does not want out there

Ooohhh... i'd love to deck out my Elite in custom colours and emblands.

I guess there'll be the issue of offensive content, so lots and lots of disclaimers everywhere (won't somebody please think of the children... yeah those little bastards will be the ones with the giant poorly drawn cocks (dear god please let them be poorly drawn) on the side of their cars. perhaps there should now be disclaimers for adults; "warning gameplay online may involve 12 year olds shouting racial slurs at you and revelations that your mum is in fact a dirty skank ass ho")

As to cross platform gaming, it could work, but I think it'll be more of a novelty then anything else and, similar to how Fight Night 3 has stick only servers, I imagine 360 owners will migrate back towards their own kind fairly quickly. It'll be interesting to see how Huxley pans out though.

Svend Joscelyne 11 May 2006 18:24
8/10
XBOX 360 - PC cross-platform play is an interesting and obviously exciting idea, as you get more people playing with each other online that way on the same game. And in theory, it seems to be a good idea.

Microsoft will, however, have to plan whatever cross-platform play games they decide to support with considerable effort though, as not every console + PC game ideas work. Take Final Fantasy XI for instance.

Containing it's own screens or one of those "flicker left and right jobbies"?

It's important - try and remember. Please.

"12:11 PM - And now a wireless headset. Looks like a bluetooth cell headset. And the Live vision camera. All 3 accessories this fall. They're trying to figure out the Japanese market, so now we're looking at Jpop-ridden RPG trailers. Kid with big blue eyes has no parents and is a chosen one - shocking."

Ah well. If you want something doing, DIY.