The genre defining series is back! 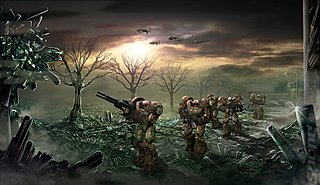 CHERTSEY, UK - April 20, 2006 ? The epic struggle between the Global Defense Initiative (GDI) and The Brotherhood of NOD continues...and the third Tiberium War is about to begin. Welcome back, Commander. Electronic Arts (NASDAQ: ERTS) today announced that Command & ConquerTM, the groundbreaking series that put the Real-time Strategy (RTS) genre on the map, is returning in full force with Command & ConquerTM 3 Tiberium Wars*. This highly-anticipated next chapter takes the popular series back to its roots in the Tiberium universe and features the fast, fluid gameplay that Command & Conquer is known for and a gripping story that will redefine storytelling in RTS games.

It is 2047 and the stakes could not be higher. Tiberium?a self-replicating alien substance that has infected the Earth?is spreading like a radioactive ice age. The GDI, a high-tech alliance of the world's most advanced nations, is fighting to contain Tiberium, but Kane, the megalomaniacal leader of The Brotherhood of NOD has other plans for Earth. Kane's secret society turned superpower is bent on using Tiberium to take control and transform humanity into his twisted vision of the future. All-out war rages over Tiberium and the fate of the planet rests in the balance.

"Command & Conquer 3 Tiberium Wars combines fast-paced gameplay with new ways to tell a story in an RTS game," said Mike Verdu, Executive Producer at EA Los Angeles (EALA). "We're building a next generation Command & Conquer game that is true to the spirit of this classic franchise, but is updated with state-of-the-art visuals, added strategic depth, and gameplay innovations that will move the genre forward. I am very excited to be working on this amazing game."

"We have been waiting to reveal this game for quite some time and are thrilled to bring the series back to where it all began," said Louis Castle, VP of Creative Development at EA Los Angeles (EALA) and co-founder of Westwood Studios, creator of the Command & Conquer series. "The Tiberium universe is a personal favourite of mine, and this saga's new direction will prove to be a worthy addition to one of the most celebrated RTS franchises."

Experience a revolution in RTS gaming with a breakthrough single player campaign that rewards you for your gameplay style. Add layers of strategy to your gaming experience by building mobile bases, wielding the power of terrifying Ion Storms on the battlefield, or customising your armies by combining units. Battle it out online with native voice-over IP, integrated clan support, and new spectator modes that let you play RTS games like a sport.