The breathtaking sequel to the critically acclaimed adventure game 'The Longest Journey' arriving on PC and Xbox in May. 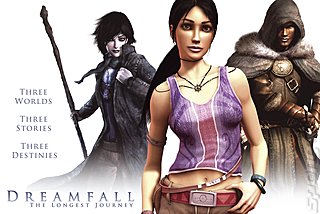 LONDON, ENGLAND, April 7th 2006 ? Released in 2000 and acclaimed as one of the benchmarks of the 3D adventure game genre upon its release, ?The Longest Journey©? is now set to herald an eagerly anticipated sequel this May in the form of Dreamfall©, The Longest Journey, courtesy of Norwegian Developer, Funcom and Publisher, Empire Interactive, one of the UK?s leading independent game publishers.

The second instalment of an epic journey that began with ?The Longest Journey?, Dreamfall is an action-packed thriller which is once again set to redefine the Adventure game genre with its incredibly ambitious, lively and convincing universe. Featuring three fully playable characters, each with their own distinctive playing style, personality and skill set, Dreamfall offers an exciting and diverse gameplay experience. And with multiple paths throughout the game with every situation offering multiple solutions, Dreamfall invites you to use your brain, your brawn and the environment to progress through the game YOUR way. (Have shortened and simplified)

In addition to its diverse cast of playable characters and its emergent gameplay, Dreamfall also has a rich canvas of worlds to play in and explore. There is Stark, a world of science in a realistic vision of an Earth of the future with locations spanning across a range of continents. To Arcadia, the world of magic, a fantasy realm with fantastic vistas and magnificent creatures. And The Winter, a mystical place outside of the boundaries of time and space, where a sinister black house holds a terrifying secret.

Three playable characters, beautiful art direction, unparalleled gameplay freedom, a great range of action approaches including combat, quests and set-pieces, an elaborate and intricate storyline, a dynamic screenplay and dazzling soundtrack; Dreamfall is about to deliver a unique, powerful and unforgettable gaming experience.