In your hands from April 7th. 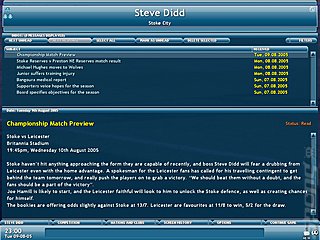 Eidos, one of the world's leading publishers and developers of entertainment software, today confirms the next instalment of Championship Manager 2006 on Sony PSP, will be released on April 7th, 2006.

Developed by Gusto Games, Championship Manager 2006 is a completely up to date version of the fully portable football management simulation, with all of the latest transfers straight from the January 2006 transfer window.

Ray Livingston, Brand Manager said; "This is the perfect football fix for fans, we're coming to the end of another fantastic season and there's a gap before the World Cup begins. What better way to spend your time then on the biggest football management simulation on the PSP."

Championship Manager 2006 on Sony PSP features 55 playable leagues across the top 12 footballing nations, a realistic 2D match engine and Quick and Challenge modes. There are now improved manager options to influence your team tactics, 25,000 players and a fully interactive transfer system with up to date January 2006 transfer data.