Maximum fun & carnage as FlatOut wrecks its way back onto your PS2, Xbox and PC. 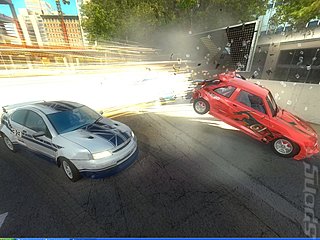 All Images (2) »
LONDON, ENGLAND, February 18th 2006 – As worldwide sales of FlatOut crash through the 800,000 mark, the sequel to the much acclaimed destruction racer is set to accelerate its way on to PlayStation 2, Xbox and PC this May in the nitrous charged form of FlatOut 2, courtesy of Bugbear Entertainment and Empire Interactive, one of the UK’s leading independent game publishers.

Featuring an enhanced version of the original’s lauded physics engine and even faster driving track designs, FlatOut 2 also boasts a plethora of improvements, enhancements and additions to make this the definitive FlatOut experience. Twice as many vehicles, a more sophisticated career mode, additional race environments, double the number of tracks; twice as many mini-games along with brand new and much requested online multiplayer modes are just some of the exhaustive features that are included in FlatOut 2.

Wreck hard in this action racer to earn the ultimate honour of being the dirtiest in the gravel, the deadliest on the race track and the meanest around the streets.

With over 5,000 fully destructible objects on every track as well as 40 deformable parts on each vehicle, physical interaction in a racing game is taken to unprecedented heights with the destructive element influencing players racing tactics like no other driving game on the market. With a greater emphasis placed on causing destruction on the track by offering greater rewards, game play will be even more frantic than ever. Drivers will need to tear into competitors’ cars, trash the local scenery thereby littering the track with all manner of obstacles. All in the attempt to wreck their opponents race enabling the collection of maximum performance and cash bonuses, while at the same time trying to concentrate on their own race in a bid to cross the line first.

And with the ever popular Rag Doll mini-games from the original FlatOut making a welcome return and better than ever with 12 Rag Doll events, a Rag Doll Championship as well as online support for Rag Dolls, FlatOut 2 is set to be the biggest, brashest and most destructive action racing game of 2006.