Sliced, Diced and Squeezed Onto Your PSP. The Samurai Warriors: State of War Website Goes Live for PC and PSP

With the March 24 release looming KOEI launch a Samurai Warriors: State of War website that can be viewed through the PSP browser. 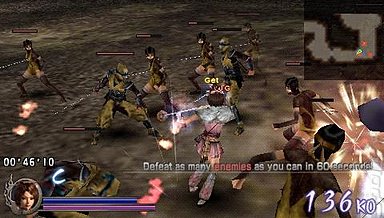 All Images (3) »
Hertfordshire, UK ? February 15, 2006 ? Koei Ltd. today launched the Samurai Warriors: State of War PSP website. This is the first port of call for anyone wanting to find out about every facet of this highly anticipated game. With exclusive screens and handy explanations, this site details all of the new features which will make Samurai Warriors: State of War the perfect companion for long journeys and brief bouts of spectacular tactical action.

This website has been designed not only to be viewed from a PC but also through the PSP browser. So any PSP owner wanting to find out about the game?s full widescreen visuals, multi-player modes and specifically designed gameplay, perfectly suited to quick bursts of play while on the move, can do so from the comfort of their train seat, bus stop or warrior filled battlefield. The European release of Samurai Warriors: State of War on PSP is scheduled for March 24, 2006.

To view the site head to: http://www.swpsp.com

From the thrill of carving your way through a flood of enemy soldiers to the stunning dramatic scenes, all the best-loved features from the acclaimed PS2 version make their triumphant return. And with the inclusion of new features such as the Battlefield Area System, which adds new strategic gameplay ideal for portable gaming, and full screen action, this is everything fans of the game could wish for in their pocket.