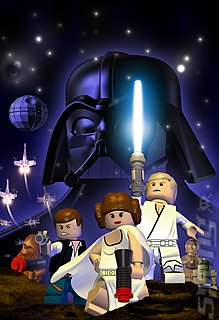 With a comical take on the Star Wars Trilogy that revolutionized pop culture forever (Episode IV A New Hope, Episode V The Empire Strikes Back and Episode VI Return of the Jedi), LEGO Star Wars II follows the Rebel Alliance's battle to dismantle the Galactic Empire and rebuild a galaxy in pieces. From Darth Vader's pursuit of Princess Leia aboard her Blockade Runner to a showdown on the reconstructed Death Star, the game includes even more of the family-friendly LEGO action, puzzles and humor that earned the original LEGO Star Wars such popularity and acclaim.

And much more new to offer, it still has. For the first time ever, levels feature vehicles and creatures that players can ride or exit at will. Also, in LEGO Star Wars II's Free Play mode, gamers can customize more than 50 new playable characters by mixing and matching body parts, to build their own LEGO Star Wars heroes. And on certain platforms, a game save from the first LEGO Star Wars can unlock as many as 56 additional characters for Free Play - that's more than 100 characters total, plus millions of possible creations! Other exciting additions include the ability to Free Play with vehicles, cool new character-specific attacks and maneuvers, playable mini-kit vehicles, an optional advanced mode for experienced players and more.

"Whether it was your first gaming experience or you've played everything released since Pong, the first LEGO Star Wars was one of those rare video games that everyone enjoyed," said Jim Ward, president of LucasArts. "With LEGO Star Wars II, LucasArts is working with TT Games and Traveller's Tales not only to set players loose through the original three chapters of the Star Wars Saga, but also to make this feel like the true sequel our fans have been clamoring for."

"TT Games is delighted to have formed a partnership with LucasArts for LEGO Star Wars II," said Tom Stone, managing director of TT Games. "The first game was an absolute joy to work on, and we're excited to deliver even more fun and creativity, this time with more features to work on and the original trilogy as the game's focus."

Distributed by Eidos Interactive, the original LEGO Star Wars was the No. 13 best-selling video game of 2005 (according to NPD Funworld) with over 2.5 million copes sold worldwide, and also won its fair share of awards. A few of the most notable include G4 Videogame TV's Best Adaptation of 2005 at the G-Phoria Video Game Awards, IGN.com's Best Platform Game, GameSpot.com's Best Use of Creative License, and it was one of 1UP.com's Hidden Gems of the Year. To date the first game has sold more than 3.3 million units worldwide.