Scheduled for release in May 2006, Pacific Storm is a groundbreaking fusion of realtime strategy gaming with all the best elements of an action title. 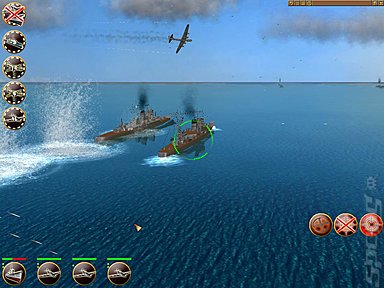 The game has been licensed from BUKA Entertainment and developed by Lesta Studios. GMX will be publishing and distributing the title in the UK.

On December 7th 1941, the U.S. Pacific Navy stationed at Pearl Harbor came under attack from Japanese fighter planes. The enemy fighters were destroying the American aircraft on land and in the air with deadly force. The battle of Pearl Harbor became the first of many to be fought over hostile waters. Now you can participate in all the major Pacific battles of the World War II in Pacific Storm ? a game that seamlessly incorporates RTS into a major action simulation title. Fight on either side, controlling US or Japanese forces and change the outcome of each historical battle!

?Pacific Storm recreates one of the most epic airborne military confrontations down to the finest detail?, quotes Eugene Perry, COO for GMX Media ?Players are given absolute freedom to control nearly every available military unit involved in the engagement. Pacific Storm will redefine games based upon historical military warfare.?


Find out more about Pacific Storm at www.pacific-storm.net