Atelier Iris Brings Some Magic Into Our Lives This Coming March 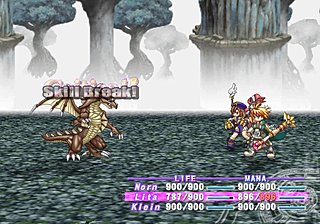 Hertfordshire, UK ? January 24, 2005 ? Koei Ltd. today announced the release date for Atelier Iris: Eternal Mana in Europe. This highly anticipated fantasy RPG will be available from March 17th. The sixth instalment in this hugely popular series is the first to be released in Europe giving gamers the opportunity to immerse themselves within a world of alchemy, monsters and the most incredibly extensive selections of items and item creating possibilities ever to appear in an RPG.

To coincide with this announcement the TacticalRpg.com website will be updated with exclusive new information and material on this hotly anticipated game. This is the only place to view new media, download exclusive wallpaper for your PC and find out in depth information about the key characters in the game, the unique world in which they live and the innovative gameplay system that is at the core of everything within Atelier Iris' magical world.

Atelier Iris: Eternal Mana takes you to the world of Regallzine, a land inhabited by humans, Mana, and vicious monsters. With the help of Mana Spirits, a select few can harness the power of alchemy to create magical items. However, over the years this practice has nearly died out. As Klein Kiesling, it's your goal to learn the lost art of alchemy. Klein's journey of self-discovery will soon lead him to join a ragtag band of adventurers who fight monsters to protect the general populace.

Synthesis System
What would a game about alchemy be without the use of alchemy? Throughout the game, you can extract elements from a variety of objects, and find items lying around the field maps. Using these elements and items, you can "synthesize" new items ? over 300 in all! You can also synthesize magical items for use in combat.

Item collecting is a hallmark of the Atelier series, and with the myriad of item combinations and character customization options, you'll have unlimited control over the lost art of alchemy.

"Cost Turn Battle system"
In this unique battle system, you may choose to use low damage attacks, which allow you to take your next turn sooner, or you can go for more time-consuming, high damage attacks. With this system, you can tailor your attack methods to the enemy you face. It may seem simple at first, but you'll have to use a lot of skill, strategy, and strength in order to overcome your enemies.
Companies: Gust Koei
Games: Atelier Iris: Eternal Mana