EA announces From Russia With Love videogame for the PSP

Sean Connery's James Bond to make his first appearance on the PSP. 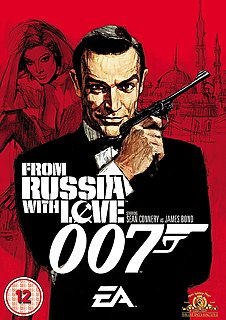 Chertsey, UK 7th November, 2005 ? Electronic Arts (NASDAQ: ERTS) today announced plans for a PSPTM version of the latest installment in the widely successful James BondTM videogame franchise, From Russia With LoveTM, starring Academy Award®-winner, Sir Sean Connery. The highly anticipated game is scheduled to ship this winter on the PlayStation®2 computer entertainment system, the Xbox® video game system from Microsoft, and the Nintendo GameCubeTM under the EATM brand. The announced PSP version is scheduled to ship in early 2006.

From Russia With Love, the videogame, will be based on the classic Bond film but also will feature new plot twists, gadgets and characters. Sir Sean Connery, appearing in his first-ever videogame, lent his voice and likeness to the project.

From Russia With Love? for the PSPTM system gives players the opportunity to experience the timeless fiction of the classic James Bond movie on the go. Invest in your character and customize Bond for a whole new level of gameplay options.