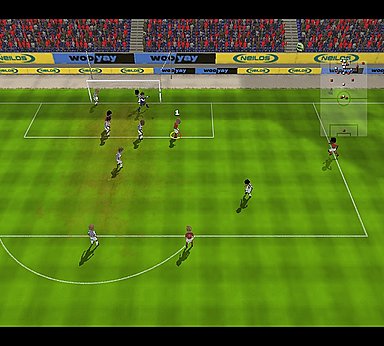 Get ready to run around with your footy shirt over your head in celebration as Codemasters today announces the revival of the legendary football game Sensible Soccer for PlayStation 2, Xbox and PC.

The all-new Sensible Soccer will launch Q2 2006 and come complete with lightning fast football action, mesmerising dribbling, physics-defying sliding tackles and, most famously, a huge amount of unbelievable goals, that can go curling into the top corner, thanks to the outrageous levels of after-touch.

Renowned as the greatest multiplayer kick-about ever, Sensible Soccer will return with a modern take on its trademark zoomed out camera and truly intuitive control system, which delivers total 360-degree control over your players' kicks and movement.

Visually, the game will have a distinctive new graphical style, which includes cel-shaded players with the classic enlarged heads, designed to appeal both to fans of the series and appeal to a new generation of gamers.

The top-down view allows you to see the build up play better than you can in any current football game. This gives the player a huge degree of tactical awareness and control that has never been bettered.

And it's not just Sensible Soccer's playability-oozing action that's back: Jon Hare, designer and producer of the original Sensible Soccer, has been working with Codemasters' gameplay gurus, David and Richard Darling, on a collaborative game design. Kuju Entertainment, publishers of Tower Studios' Sensible Soccer for mobile phones, is managing development.

"Following the success of Sensible Soccer's recent mobile edition and the fantastic retro Plug 'n' Play TV version of the game, it's great to bring a truly new version out for the first time in over eight years on all of the major formats." says Jon Hare, now a director of Tower Studios and games design consultant,

"We are doing everything in our power to modernise and recreate the sheer playability, fun and footballing depth of the original and remind the playing public just what they have been missing out in the current market of slow, drab sims."

Sensible Soccer will come loaded with masses of teams and players, multiplayer games for up to four players, and 50 preset competitions from all over the world.

In addition to the pre-set tournaments, Sensible Soccer will feature a DIY Competition mode, which enables you to play cups, leagues and tournaments with your own competition rules.

You'll also be able to create your own Dream Team in the game's Custom Career Mode and play them in any of the competitions. As you clock up the wins for your squad, you'll be rewarded with over 100 unlocks and upgrades, both useful and comedic, to customise your players with including Five Star Skill Bonuses for players and Dinner Jacket football kits!

With further special content that will celebrate the series' 15-year anniversary yet to be revealed, Codemasters will publish Sensible Soccer for PlayStation 2, Xbox and PC in Q2 2006. Codemasters Mobile will simultaneously release a Sensible Soccer spin-off game for mobile phones.

Prepare for the return of banana kicks and more online at the game's websites www.codemasters.co.uk/sensiblesoccer and hook up with your future Sensi teammates in the forum at www.codemasters.com/forum/
Companies: Codemasters Kuju
People: David Darling Jon Hare Richard Darling
Games: Sensible Soccer 2006