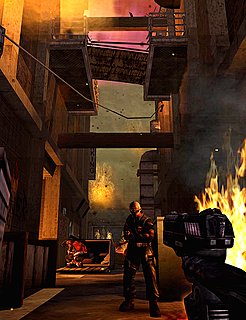 Eidos Interactive, one of the world’s leading publishers and developers of entertainment software, today confirms that the game previously known as Roll Call has been re-named and will feature as a major part of the 2006 line-up of titles under the new title Zero Tolerance - City Under Fire.

Developed by London-based Rocksteady Studios, Zero Tolerance is a high velocity, action shooter confronting real terror in a real city. Play as Nick Mason, an ex-US marine and part of T-Zero, the elite counter-gang unit. Specially trained in all areas of urban combat and armed with the very latest high-tech weaponry, T-Zero is all that stands in the way of total anarchy.

Experience a year in the unpredictable life of a T-Zero Officer in a city on the brink of collapse as he works with the Emergency Services in a desperate fight to save his city.