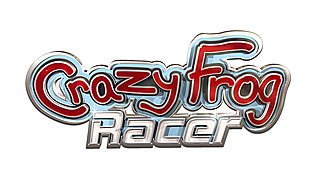 All Images (2) »
London, UK ? October 21, 2005 ? Ubisoft, one of the world?s largest video game publishers, today announced that it has signed a deal with Digital Jesters to distribute Crazy Frog Racer, the first Crazy Frog video game, which is set to launch on PC, PlayStation 2 and Gameboy Advance this Christmas.

Following its debut as a ringtone and mobile mascot, the Crazy Frog became a mainstream phenomenon, with its 'Axel F' single spending four weeks as the UK's best-selling single this year. Subsequent singles are in the pipeline, and an album was released this summer ? so whether you love or loathe the grinning, virtual bike-riding amphibian, there's little chance of escaping him this year.

Crazy Frog Racer is a high-speed, high-octane wacky races style game that will appeal to all fans, young and old. Players can either choose to play as ?The Annoying Thing? and D'Ding Ding their way to victory or take on the role of one of eight other unique playable characters and beat the frog at his own game. There are 12 different tracks to work through including cityscapes and underground mazes, plus the option to play single-player or take on your mates in multi-player mayhem.

?We are delighted to have formed this partnership with Digital Jesters,? said Rob Cooper, managing director northern Europe/Australia-NZ/export at Ubisoft. ?We?re extremely hopeful that Crazy Frog Racer will be just as big a success as the other Crazy Frog products have been to date. This is a truly mass market game with wide appeal to a very broad audience.?

Crazy Frog Racer is scheduled to launch in November 2005 for PC CD-ROM and PlayStation 2.