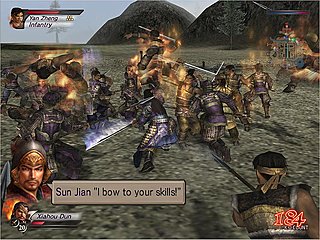 All Images (3) »
Hertfordshire, UK ? October 20, 2005 ? Koei Ltd. today announced plans to publish Dynasty Warriors 4 Hyper for the PC in Europe. The Dynasty Warriors series has sold millions worldwide and in doing so built up a huge following. This move onto PC is a first for the series and will see the spectacular massed battles that the Dynasty Warriors games are famed for brought to a whole new audience. The European release of Dynasty Warriors on PC is scheduled for the 9th December.

More information will soon be available at: http://www.koei.co.uk

About Dynasty Warriors 4 Hyper on PC:
The Dynasty Warriors series made its debut back on the PSone and has since gone from strength to strength with each release. It now appears on PS2, Xbox, GBA, PSP and will soon give PC gamers the chance to indulge in one of the most frenetically action packed gaming experiences on any system.

Dynasty Warriors 4 Hyper will also offer players a much more striking visual experience by taking advantage of the PC?s higher screen resolution to offer twice as many on screen characters, double the draw distance of previous versions, anti aliasing, texture filtering, dynamic shadows and much improved enemy AI. From the classic Musou Mode to the vast range of special attacks, powerful weapons and lethal bodyguards, PC gamers will be getting the definitive Dynasty Warriors package.