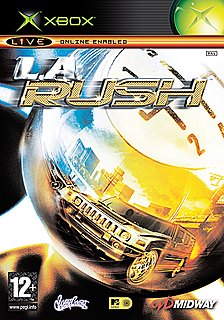 Midway?s President and Chief Executive Officer, David F. Zucker, commented, ?We have been collaborating with Pitbull on the upcoming reinvention of our RUSH franchise, L.A. RUSH, which we anticipate will be launching in October. This close-knit team of highly talented developers brings to Midway a successful track record, specifically the Test Drive series, of which three titles have sold over one million units. L.A. RUSH will be the first title in our co-marketing relationship with MTV, and we are excited to add the creative force behind this title to our expanding internal development staff.?

Midway?s Senior Vice President ? Worldwide Studios, Matt Booty, said, ?Pitbull has mastered the art and science of arcade-style racers, with sophisticated technology that allows huge free-roaming environments, hundreds of destructible objects, and an advanced artificial intelligence system capable of handling more than 100 vehicles at once. Pitbull will form the foundation of Midway?s future racing games, and we are excited to expand our international presence in one of the strongest regions for game development talent in the UK.?

Based in Newcastle, UK, The Pitbull Syndicate Limited was established in December 1996 by a small group of programmers and artists who specialize in racing games, producing four games in the Test Drive series, which has sold over 5.5 million units throughout the life of the franchise.

In addition to shares issued as consideration for the acquisition of Pitbull, 25,146 restricted shares of Midway common stock were issued to key Pitbull employees as retention incentives. The restrictions on the shares will lapse over a period of three years, provided the employee remains at the Company. Pitbull employees who received the rights were: Pete Brace, Ian Copeland, Gavin Freyberg, Jonathan Kay, Daren Kelly, Mark Leadbeater, Ben Marsh, Chris McClure, Stewart Neal, Mark Wilkinson, and Chris Wood.

Midway Games Inc. (NYSE:MWY), headquartered in Chicago, Illinois, with offices throughout the world, is a leading developer and publisher of interactive entertainment software for major videogame systems and personal computers. More information about Midway and its products can be found at www.midway.com.

This press release contains ?forward-looking statements? within the meaning of the federal securities laws concerning future business conditions and the outlook for Midway Games Inc. (the "Company") based on currently available information that involve risks and uncertainties. The Company's actual results could differ materially from those anticipated in the forward-looking statements as a result of these risks and uncertainties, including, without limitation, the financial strength of the interactive entertainment industry, dependence on new product introductions and the ability to maintain the scheduling of such introductions, the upcoming console platform transition and other technological changes, dependence on major platform manufacturers and other risks more fully described under "Item 1. Business - Risk Factors" in the Company?s Annual Report on Form 10-K for the year ended December 31, 2004, and in the more recent filings made by the Company with the Securities and Exchange Commission.
Companies: Midway Midway Studios Newcastle Pitbull Syndicate
People: David F Zucker Mat Booty