Blitz: The League Announced For Xbox 360 In Europe 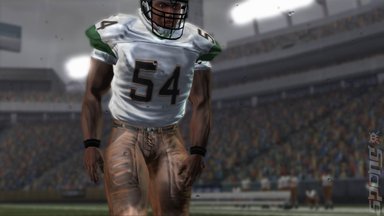 Taking players behind the glitz and glamour of professional American football through a revolutionary campaign mode, Blitz: The League explores the on-field violence, off-field fallout and front-office politics feeding the headlines in America?s media spotlight. Unlicensed and uncensored, the new version of Blitz: The League is scheduled for release across Europe on 23rd February 2007 on Xbox 360 with a R.R.P. in the UK of Ł29.99..

In North America the game has sold over a million units and gained a grass-roots reputation for being even more hardcore than professional American football itself. The bone-crushing action delivers a punch in more ways than one. Players can create and develop the greatest teams in the League?s history using a wealth of customizable options in an attempt to take their squads to the very top of the league standings. An unleash meter in the game also allows players to slow down play and pull off drastic moves, break free of tackles and evade opponent players. This hardcore adrenaline spectacular is playable in single and multiplayer modes, as well as via the Xbox Live® online game service. Awesome!

?Blitz: The League is free of the constraints that an official league license levies against games in this sporting genre. The result is about as far removed from a clean, fair, sporting experience as it?s possible to get ? one of the many reasons why this game has been such a storming success in the US with sales of 1 million units, and why consumers have demanded we release it in Europe,? said Martin Spiess, Managing Director -Europe, Midway Games Ltd.
Companies: Midway
People: Martin Spiess
Games: Blitz: The League