A handful from the handheld. 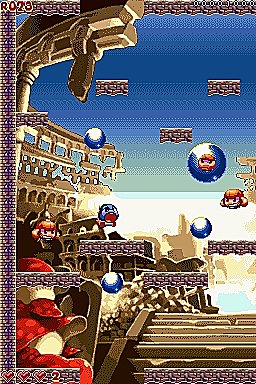 All Images (5) »
Rising Star Games today announced that the classic Taito arcade title Bubble Bobble will be the next videogaming legend to be updated for Rising Star's "Revolution" games brand on the Nintendo DS, accompanying the announcement with a series of screen shots and details of input from Igusa Matsuyama, the character artist behind Harvest Moon's charming protagonists and supporting cast.

Bubble Bobble Revolution will be released for the Nintendo DS in October 2005, bringing with it a range of amazing new features including a brand new multiplayer mode for up to four players.

In line with Rising Star's commitment to bringing innovative, distinctive and individual Japanese titles to the UK market, Bubble Bobble Revolution marks the second release in a series of updates to some of Taito's most-recognised and fondly regarded brands. As one would expect from an update, Bubble Bobble Revolution retains the classic playability and wonderful charm of the original whilst introducing a wealth of innovations, including new play modes, new bubble types and new collectable items.

The trademark New Age mode constitutes the bulk of the game. It takes the form of a single player adventure, allowing players to pick previously played levels from a map of the island where the story takes place. On a quest to rescue some missing friends, the eponymous Bub or Bob return to play through levels displayed across the two screens of the Nintendo DS. These levels also scroll horizontally to provide a wide, panoramic play area.

New features also abound in the levels: There are new environmental dangers, a new way to enforce the time limit, microphone-activated fans to alter the flow of bubbles and, most interestingly, a brand new power bubble. Along with series stalwarts like the torrent-inducing Water Bubble and its companions, the Fire and Lightning Bubbles, comes the Ghost Bubble; an entirely new power-up that opens up a plethora of new gameplay techniques and possibilities.

Bub and Bob also have new bubbles of their own to blow, again opening up a wide range of new tactical opportunities to exploit. Bubble Bobble Revolution also gives players a limited health bar rather than maintaining the stern one-hit kills of the original.

Bubble Bobble Revolution will also feature a brand new four-player competitive multiplayer mode. Here, combatants fight to rid levels of monsters with the victor being the player who captures the most. The fact that players can harm each other with their bubbles adds an entirely new aspect and mood to the Bubble Bobble lineage.

Those wishing for a more co-operative approach will benefit from the Classic Mode's two-player recreation of the arcade original, which also contains a single player version for those bravely wishing to be the sole conqueror of the first game in the much-celebrated series.

By including so many new features, Bubble Bobble Revolution builds on its stellar legacy to push the franchise forward whilst exploiting the many benefits that arise from the unique features of the Nintendo DS hardware and is set to take its position as the rightful heir to Bubble Bobble's permanent entry in videogaming's hall of fame.
Companies: Rising Star Taito
People: Igusa Matsuyama
Games: Bubble Bobble Revolution