The ESC Golf Day goes with a swing. 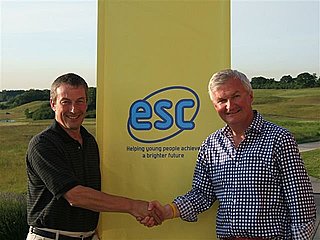 The computer and videogames industry charity raised over Ł11,000 from its first ever golf day. The British weather was also in a charitable mood as the Entertainment Software Charity (ESC) played host to the industry's golfers at the London Golf Club near Sevenoaks in Kent.

Captain of the Zoo Digital team Ian Stewart said, "We had a fantastic day and thanks go to all the organisers. The London Club were perfect hosts, the course was in great condition and the weather couldn't have been better. To top it all a total of about Ł11,000 was raised for the ESC. It was a great day all round."

Mark Strachan said "As this was the ESC's inaugural Golf Day we're incredibly pleased that it went so well and we hope that this will now become an annual fixture on the industry calendar. I would like to say a big thank you to all of our sponsors who made the day possible. These include Miller Advertising, Sega, THQ, NCsoft, Midway and MCV."
Companies: ESC Midway NCsoft Europe SEGA Zoo Digital
People: Ian Stewart