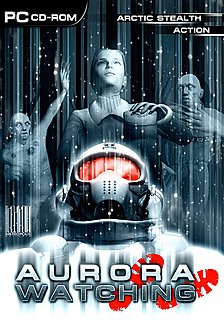 Dropping red-hot action and ice cool stealth gameplay into the frozen wastelands of the Arctic, there's really no time to stop and gawp at the Northern Lights in Aurora Watching. A Russian submarine, the Komsomletz II, has unexpectedly sunk during manoeuvres on the Barents Sea and intelligence has established that the area the sub went down supports a suspicious military complex, the purpose of which is unknown.

Only one person can establish just what the hell is going on and he goes by the name of White Fox. However, the fox who once saved the world has been drinking, hard, for two years.

The gaming environment of Aurora Watching takes place across many locations in, under and around an iceberg, as well as in 'das boot' itself. The game features two camera modes, designed for tactical planning and combat. Mini games, puzzles and high tech gadgets also gel the action and stealth sequences together and context sensitive music charges an electric atmosphere and delivers pace and urgency as the arctic adventure unfolds.

No lone White Fox worth their salt would enter such a potentially dangerous environment unarmed and players are kitted out with a whole armoury of high-tech gadgetry and weapons. Starting out with a standard pistol, firing both regular and silent ammunition, and trusty commando knife, players can progress to pick up slain enemy weapons, including submachine guns and sniper rifles. Alongside arms, a medical kit, portable computer and distraction devices are also essential items to progress stealthily through the game.

"When the developer showed us this title, we knew that it was going to be a must-have for all fans of action and stealth games – this game has the lot," commented Howard Newmark, General Manager of Enlight Entertainment.

Aurora Watching will be published in the UK for PC by Enlight Entertainment Software on 29th July 2005, priced Ł19.99.