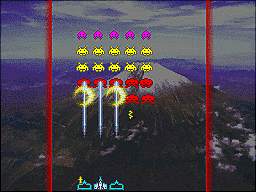 The agreement covers Rising Star's first year of titles for all PAL countries excluding The Nordic territory, and kicks off with Space Invaders Revolution on Nintendo DS in June 2005.

Space Invaders Revolution ? developed under the strict stewardship of original Space Invaders creator Tomihiro Nishikado ? combines the original game and an updated 'Quest' mode, adhering to the spirit of the 1978 coin-op classic, resulting in a handheld title which will appeal to games players young and old.

"The Rising Star Games agreement is a real coup for Atari," adds Jeremy Wigmore, UK Managing Director, Atari. "With a host of original titles alongside fresh and modern updates of some of the industry's most classic franchises, Rising Star Games is set to become the label of choice for gaming connoisseurs."