Hip Interactive will be releasing this fall Rugby Challenge 2006 on PS2, Xbox and PC across PAL territories. 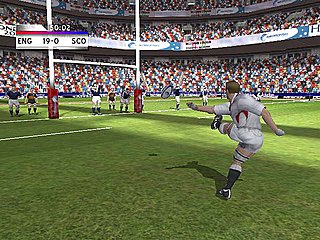 Hip Interactive, world leading publisher of PC and videogames, is pleased to announce the forthcoming release of Rugby Challenge 2006 from the much acclaimed developers of World Championship Rugby, a top-5 selling release in the United Kingdom and France since its launch last year.

Rugby Challenge 2006 promises to deliver the action with slick presentation, together with unsurpassed hard hitting encounters that avid Rugby fans richly deserve and expect. Developed by Swordfish Studios, which was recently named Developer of the Year at the second annual TIGA awards, Rugby Challenge 2006 will feature:

Players/Teams - all the licensed players and teams are researched before they are entered into the game.

Career mode - enables players to manage, wheel and deal and play your way to the top.

Weather Conditions - choices to play a game in dry or wet conditions, and either during daytime or in the evening.

Stadia - There is a mixture of both real-life stadiums (such as Murrayfield, Lansdowne Road, Twickenham, Millennium Stadium, etc.) and fictional stadiums.

Plus a lot more to be announced at E3.

Utilizing a mixture of motion captured and hand animation for top class presentation, along with cutting edge AI for sophisticated tactical manipulation, Rugby Challenge 2006 will delight gamers with its immersive gameplay and easy to understand manipulation.

Rugby Challenge 2006 – the next leap forward.

*This title is for EUROPEAN release only and is not approved or endorsed by Sony Computer Entertainment of America.
Companies: Hip Interactive Swordfish
Games: Rugby Challenge 2006