Don't all rush at once! 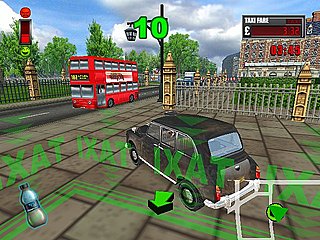 Data Design Interactive are pleased to announce that the Official London Black Taxi Cab game, London Taxi Rush Hour which is set in London England, complete with landmarks such as Trafalgar square, Big Ben and Hyde Park will soon be available for download and purchase from the London Taxi Rush Hour via Data Design Interactive?s Online Store in Digital Download format, more to come on in the next few days.

London Taxi Rush Hour, will be retailing for Ł19.99 and available for worldwide download in the coming weeks.

This is not going to be a one off, said Stewart Green MD. Data Design Interactive ?We have around 15 titles in our back catalogue, not forgetting our future releases which stand at a further 10 this year alone. As a developer, this is quite a unique way of releasing our titles to the market, we will be able to offer gamers the ability to download a pure digital format without the need of a disk?.

The London Taxi Rush Hour game will be based on what black cabs do best; collecting customers and taking them to famous London destinations within the time limit in order to get paid. There will be different routes, obstacles and busy traffic to traverse before picking up one of the many paying customers waiting for a lift. ?London Taxi Rush Hour? will feature a realistic map of central London for players to race around. The Official London Black cab itself is perfectly rendered, and features environment mapping to bring out the high-polished look of the famous London Black Cabs.

?This is a great arcade title?, said Stewart Green MD. Data Design Interactive. ?Gamers will be able to just pick up and play, weaving between the traffic and racing against the clock; chase, smash, and crash - the emphasis is on great fun. As developers, we have come up with a great playable game, and then chosen the classic black cab as the ideal vehicle and London as the best environment in which to race. It is great to have the chance to write games for gamers, rather than for just another film license?.

There will be a special demo available within the next few days which will be called ?London Taxi Rush Hour? May Fair which is where this level is based, and over the next few weeks there will be more levels made available, and special challenges with league tables for the best taxi driver of London.

Console version will be available at the end of August for PS2 and Xbox.
Companies: DDI
People: Stewart Green
Games: London Taxi Rushour