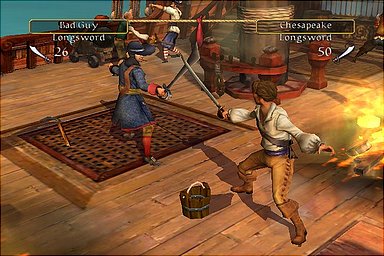 2K Games, a publishing label of Take-Two Interactive Software, Inc. (NASDAQ: TTWO), and Firaxis Games announced today the acquisition of publishing rights to Sid Meier's Pirates! Pirates! for the Xbox(R) video game system from Microsoft will be released by 2K Games this summer. Also included in this expanded partnership between 2K Games and Firaxis Games are publishing rights to the previously released PC version of Sid Meier's Pirates!

Separately, 2K Games had previously secured publishing and distribution rights to Sid Meier's Civilization back catalogue of products and will begin publishing these titles as of July 1st.

"It's very exciting to strengthen our relationship with Firaxis Games, a development studio that consistently produces games of the highest quality and with mass consumer appeal," said Christoph Hartmann, Senior Vice President of Publishing for 2K Games. "Sid Meier's Pirates! makes an excellent addition to the 2K Games summer line-up and we also look forward to expanding our catalogue of products with the Civilization titles."

"Sid Meier's Pirates! was one of the most acclaimed PC titles of 2004," said Jeff Briggs, Founder, President and CEO of Firaxis Games. "Now with 2K Games on board, we're ready to bring the same fun and innovative experience to Xbox gamers across the globe. It's great to work with a publisher like 2K which shares our vision for bringing the very best interactive entertainment to audiences worldwide."

"Pirates! for the Xbox brings the re-imagination of our legacy brand to new audiences in new ways, said Sid Meier, Director of Creative Development at Firaxis Games. I think Xbox gamers will be pleased with some of the assets and experiences we've been able to add because of special opportunities the platform offers."

In Sid Meier's Pirates! players take the leading role of a Pirate Captain in the 17th century Caribbean - amassing fortune and fame in an attempt to seize a rightful place as one of the most revered and feared pirates in history. Players test their skills as a sea captain exploring the high seas and exotic ports in a richly detailed 3D world. Additions for the Xbox version of the game include two new 2-4 player console-exclusive mini-games, Xbox Live leaderboards and content downloads, support for Dolby Digital 5.1 surround sound and HDTV resolutions and much more.