The Sith have their revenge at Virgin Megastores midnight opening on 4th May. 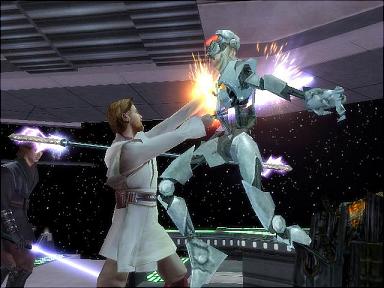 At 12:01am on Thursday 5th May, Virgin Megastore, 14-16 Oxford Street, London will open its doors and invite customers to purchase the hugely anticipated Star Wars? Episode III: Revenge of the Sith? video game on PlayStation 2 and Xbox. Two weeks before the release of the movie, die hard Star Wars? fans will be able to get a sneak preview of the long awaited conclusion to the movie saga and experience lightsaber battles which go well beyond the movie.

Darth Vader and Stormtroopers will be there to greet customers and the first 50 people to purchase the game will be rewarded with Star Wars? exclusive goodie bags. Everyone who turns up on the night will receive a limited-edition reversible wristband, allowing fans to show their allegiance with pride. The store opening will culminate with a presentation for those dressed as their favourite Star Wars? characters with five lucky winners receiving a lightsaber from LucasArts ? the publishers of Star Wars? Episode III: Revenge of the Sith?.

The evening will also reveal the winner of Virgin Megastore?s Star Wars? Poll. For those who?ve had enough of the bickering between Blair, Howard and Kennedy in the general election, why not vote in Virgin Megastores election to determine which character you feel would take a stance against evil as the best alternative Prime Minister? Competition is expected to be fierce with Princess Leia, Obi-Wan Kenobi and Yoda emerging as likely candidates. The winner will receive a 7 night holiday to Orlando, Florida courtesy of Virgin Holidays plus tickets to Disney World who are having Star Wars? themed weekends.

?We are excited to be able to give game players in the UK the chance to be the first to take home a piece of Star Wars? Episode III: Revenge of the Sith,? said Sarah Ewing, General Manager LucasArts Europe at Activision. ?It?s a major coup for the official game to precede the movie and it will give fans a taste of what to expect from the movie.?

In the Star Wars? Episode III video game, players will control all the Jedi abilities of both Anakin Skywalker and Obi-Wan Kenobi, including devastating Force powers and advanced lightsaber techniques involving robust combo attacks and defensive manoeuvres. As Anakin, players will unleash the power of the dark side in ruthless lightsaber and Force attacks. As Obi-Wan, players will struggle to save the galaxy from darkness by focusing the power of the light side into swift and precise lightsaber attacks and using the Force to control enemy actions.
Companies: LucasArts Ubisoft
People: Sarah Ewing
Games: Star Wars Episode III: Revenge of the Sith Star Wars Episode III: Revenge of the Sith