EA and Warner Bros. Interactive Entertainment Announce the Harry Potter and the Goblet of Fire Videogame

Join forces with friends to win the Treacherous Triwizard Tournament on console, handhelds, and PC. 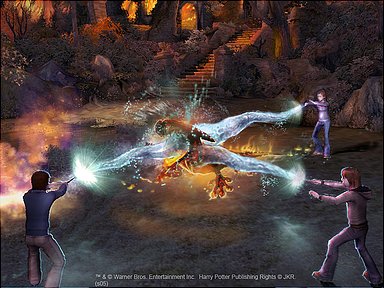 Electronic Arts and Warner Bros. Interactive Entertainment are pleased to announce the Harry Potter and the Goblet of Fire videogame, scheduled for a November 2005 release in conjunction with the Warner Bros. Pictures film based on J.K. Rowling's fourth book. In the game, players experience the thrilling moments of the movie and put their magic to the ultimate test in co-operative play with up to two friends.

"Harry Potter and the Goblet of Fire is the fifth Harry Potter videogame we have created, and we are incredibly excited with the fresh innovations that the team has brought to the game," said Harvey Elliott, Executive Producer at EAUK. "With high anticipation for the film and our strong relationship with Warner Bros. Interactive Entertainment, we have been able to develop a game that complements the film in this exciting addition to the Harry Potter franchise."

"Working with EA, we look forward to offering players a highly developed Harry Potter game with Harry Potter and the Goblet of Fire," said Jason Hall, Senior Vice President for Warner Bros. Interactive Entertainment. "The game will possess the extremely creative aspects of the Harry Potter world captured in both the film and the book, giving fans a complete interactive experience."

In Harry Potter and the Goblet of Fire, Harry is mysteriously selected as the fourth competitor in the dangerous Triwizard Tournament. Each contestant in this international competition must confront a fire-breathing dragon, rescue friends from the icy depths of the Black Lake, and navigate the twisting mysteries of a vast, dangerous maze. Players will experience all the thrills of the movie - from the Quidditch World Cup campsite to a heart-stopping duel with Lord Voldemort himself!

Harry, Ron, and Hermione are all playable characters, modeled after their big-screen counterparts. In this game, an all-new spell-casting system allows players to feel the magic for the first time as the controller shakes and reacts with every flick of the wand. Players can also team up with friends in co-operative play to combine their magic and produce more powerful spells than ever before!