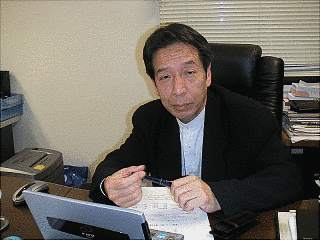 Tomohiro Nishikado
All Images (2) »
Rising Star Games, the new European publisher dedicated to bringing the very best Japanese games to the West, has revealed that the guiding light behind its forthcoming Nintendo DS title 'Space Invaders Revolution' is none other than the creator of the 1978 original.

Mr. Tomohiro Nishikado occupies the role of CEO at development company Dreams and has personally been overseeing the development of this 're-imagining' of the original Space Invaders.

The update brings a fresh perspective on the Taito classic, whilst at the same time retaining the essence of one of the most enduring videogames of all time – something important to the original programmer.

"Since 1978, Space Invaders has gone through many iterations – some of which have lost the spirit of the original game," says Mr. Nishikado. "With Space Invaders Revolution, I wanted the team to take the game back to its roots – whilst at the same time adding features which would appeal to modern gamers. The result is a game which is as fresh as the original, but which will equally well to those too young to remember the arcade game."

No version of Space Invaders would be complete without a faithful reproduction of the original arcade machine and Space Invaders Revolution is no exception. With a choice of Control pad or Touch Screen and stylus controls, players can steep themselves in the nostalgic wonder of the shooting game that started it all.

For those wanting a more modern challenge, there's the New Era mode. Here, the simple rules of Space Invaders are expanded and twisted into a truly modern game, bringing in puzzle elements as well as other improvements to the tried and tested formula.

Taking the form of a world tour, players must battle waves of invaders in locations around the globe, eventually taking in a climactic showdown with the UFO mother ship on the moon. With unique rules for each geographical stage, the player must battle though three rounds to successfully defend that particular location before moving on to the next. In London, for example, players must shoot the invaders in a colour-coded order to defend Big Ben. At the Acropolis, Athens, the challenge comes in the form of a heavily armoured but lone invader, which takes several well-timed direct hits to kill. Other novel forms of videogaming's archetypal aggressors, such as shadow invaders that blink in and out of invulnerability and giant invaders that must be killed piece-by-piece, bring the total of unique invader types in Space Invaders Revolution's New Era Mode to 13.

Comprising of 20 different challenge locations, there's 60 levels to fight through, so it's understandable that the player should have a helping hand from an array of extremely useful power-ups, including protective shields, additional support craft, rapid-fire shots and column-clearing laser beams – essential aides as the action becomes progressively more intense. Even better news is that these power-ups can be used in combination: using the support craft with the laser power-up results in three laser beams, decimating multiple waves of invaders with every press of the fire button.

The many additions and innovations present in the New Era mode promise to genuinely revolutionise one of videogaming's most loved, most recognisable and longest-enduring brands.

"Space Invaders Revolution is a game close to my heart," concludes Mr. Nishikado. "And I am confident my personal stewardship will help the game live even longer in the hearts of modern games players."