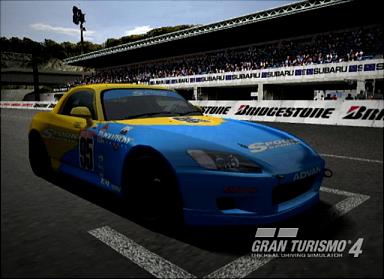 "The reaction to Gran Turismo 4 from retailers across PAL territories has exceeded even our high expectations," said David Reeves, President, Sony Computer Entertainment Europe. "This Day One number reflects the popularity and broad appeal of the series ? not only with seasoned GT buyers but with driving fans, motoring enthusiasts and casual gamers alike. We expect Gran Turismo 4 to become the "must-have" title for anyone who owns a PlayStation 2 or anyone thinking about purchasing one."

"I am delighted by the enthusiasm for Gran Turismo 4," said Kazunori Yamauchi, creator of the GT series. "The game has been a long time in the making and is fuelled by the passion and dedication of the team here at Polyphony Digital. My dream was to create more than a sequel ? to redefine what a video game could be. I hope that when players experience the realism, variety and sheer depth of Gran Turismo 4, they will agree that this vision has been realised."

Developed hand-in-hand with the motor industry's leading marques, Gran Turismo 4 offers drivers the ultimate ride, with over 700 cars, more than 50 race tracks, new music, new manager and photo modes, better-than-real-life graphics and enhanced simulation. Built with, and tested against, the real cars, real circuits and real test drivers, every car in the GT4 paddock performs, handles, sounds and behaves exactly like its metal equivalent ? giving you the chance for a no-limits test drive of the world's finest cars from the Aston Martin DB9 Coupe, Audi Le Mans Quattro, Nissan 350Z or Ford GT to the Mercedes SLR McLaren.

10 Additional Cars for the PAL Version... GT4 was released in Japan on December 28, 2004 with an extensive list of 700 cars. In Europe and Australasia, driving fans will be treated to an additional 10 cars including the stunning new Alfa Romeo GT, the beautiful Audi Nuvolari Quattro, the award-winning modified Golf IV R32 from HPA Motorsports, the record-breaking Auto Union V16 Type C Streamline Race Car, the controversial Chaparral 2J Race Car and the 1993 Le Mans-winning Peugeot 905.

The Best Tracks... GT4 boasts a 52 track line-up including world-famous circuits such as Suzuka and, for the first time, the notorious Nurburgring Nordschleife and La Sarthe at Le Mans. There are also city courses in Seoul, Paris, Tokyo, New York, Seattle, Assisi, Capri and Monte Carlo, power and speed drag-strips, original, dirt and snow tracks (including in the Swiss Alps and Chamonix) and driving parks ? many of which can be driven in reverse.

The Best Settings... New technology blends real-time action with a photographic background to immerse the player in real landscapes including New York City, Paris and the Grand Canyon. Detailed vehicle and environment mapping create broadcast-quality graphics ? from competitor car reflections and light on the player's vehicle to sparks flying as your exhaust pipe clips! The team spent six-weeks on location taking tens of thousands of photographs at each track to ensure realistic modelling of the track characteristics down to a 15mm level of detail.

The Best Sounds... The roar of the engine in Gran Turismo is a recording of every individual real car, based on the team's extraordinary visits to museums, factories and test tracks in their quest for audio perfection. While driving or watching a replay you can enjoy music from classic rock to drum 'n' bass with artists including British band Kasabian, rock group Eagles of Death Metal, the enigmatic DJ Freq Nasty and break-beat master Bushwacka. The widest variety of music ever in a video game is completed with classical music from Bach, Chopin, Mozart, Debussy and others.

The Best Control... consider yourself manager material? The new GT4 B-Spec Mode lets you become the race manager. This is the first time that non-gamers can take part in the gameplay by deciding on race pace, pit-stop strategy and tuning to help their drivers win. B-Spec lets back seat drivers take control in a mode that creator Yamauchi describes as "The GT you can enjoy while drinking a cup of coffee".

Best Shots... GT4's all new Photo Mode lets you shoot and print perfect photos of your favourite cars at your favourite tracks or, as a virtual tourist, at one of 15 famous city locations including the Brooklyn Bridge and the Las Vegas Strip. Budding photographers can choose their camera, add special effects and download to a memory card or USB memory stick. Photo Mode and the in-game replays achieve better-than-real-life visuals by allowing cameras to be placed close to high speed racing cars and enabling new angles to be achieved in always-perfect lighting.

The Best Tuning ... For the ultimate petrol head, GT4 offers a new engine tuning mode. Novices can select a Quick Tune Up to fine-tune the car's power and weight and adjust transmission and tyres. Enthusiasts can manually tune their vehicles at the Tuner Manufacturer Village, home to nine tuning shops that specialise in brakes, exhaust, turbo, drivetrain, suspension and tyres. Gamers can pimp their rides by adding front and rear spoilers or by switching rims.