Xplosiv shoots, spooks and gambles its way into 2005!

Xplosiv gets year off to great start with first releases for 2005 due in March, continuing its trend of quality games at the best budget prices. 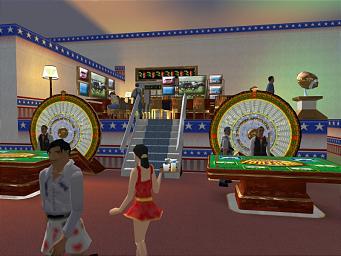 Vega$: Make it Big
All Images (3) »
As usual there will be a good selection of titles positioned in the Ł9.99 and Ł4.99 ranges that should please the palette of any gamer with a good dose of war gaming, space adventure and even a bit of ghoulish management thrown in into the fray.

Freelancer?s original review scores speak for themselves ? 90% PC Gamer ?it?s a classic?, 84% PC Zone, 8.5 gamespot.com, 83% gamespy.com. Freelancer presents players with a vast, open-ended universe filled with an infinite number of adventures. Playing as freelancer Edison Trent, an intergalactic jack-of-all-trades, your mission is: do whatever you want. Become a smuggler or a ruthless space thug, a naval hero or a trader. Dodge through asteroid fields while piloting elite spacecraft, making your way through 48 known star systems.

Also at the Ł9.99 budget price point, for RTS fans there is Blitzkrieg?s ?rock solid and intuitive? gameplay (PC Zone) and the large-scale, cannon-happy warfare of American Conquest (?it really is a splendid game?? 9/10 Eurogamer). Last but by no means least, at the Ł4.99 super budget price point, are top-selling Sims Ghost Master (?spooktacular? 87% PC Zone; ?an open-ended scare-em-up that's as good-looking and funny as it is original? PC Gamer) and Vegas: Make It Big.

The new releases are great additions to the range, 2005 promises to be a great year for Xplosiv? commented Jo Fawell, Product Manager for Xplosiv, ?we have some great PC and PlayStation 2 titles planned for this year, delivering the best possible quality, value and choice for consumers?.

Xplosiv?s portfolio now boasts a range of over 60 titles for PC and 20 titles on PlayStation 2, with over 30 new PC releases and a further 10 new PlayStation 2 releases planned for this fiscal year. Xplosiv has also taken its first steps into value software for Xbox and Gamecube with five titles available on these platforms.
Companies: Xplosiv Software
People: Jo Fawell
Games: American Conquest Blitzkrieg Freelancer Ghost Master: The Gravenville Chronicles Vega$: Make it Big