Embark on the Ultimate Adventure 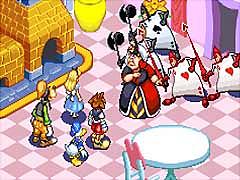 Nintendo today announces the European launch of Kingdom Hearts Chain of Memories, in collaboration between Square Enix and Disney Interactive, a publishing label of Buena Vista Games, Inc., and Nintendo who will distribute the game in Europe. Enter a world of high adventure, mystery and intrigue, featuring over 100 of your favourite Disney and Final Fantasy friends and foes. Having achieved great success in the US and Japan, with 1 million copies of the game sold, Kingdom Hearts Chain of Memories launches across Europe on the Game Boy Advance on 6th May 2005.

A special Kingdom Hearts Chain of Memories Limited Edition Pak will also be available from 6th May 2005. This Pak includes a limited edition two-tone (Kingdom Deep Silver and Black) Game Boy Advance SP - a console not to be missed!

Set directly after the events of Kingdom Hearts, the story begins as Sora, Donald and Goofy search for Riku and the king of Disney Castle. One evening, a shadowy figure appears and beckons Sora to a mysterious citadel called Castle Oblivion, where the power of cards rules over all. Sora and his companions follow in hopes of finding their lost friends, but before long they realize that this journey may cost them more than they can give.

Each floor in Castle Oblivion is the gate to a new world. Players will visit timeless worlds from the Disney universe, from The Little Mermaid to Winnie the Pooh, as well as worlds unique to Kingdom Hearts and new, never-before seen worlds that hint at secrets to unfold in Kingdom Hearts II.

The combat system in Kingdom Hearts Chain of Memories is an innovative card-based system played in real-time, an addictive blend of traditional action and card-based strategy. Taking on the enemy is as simple as any other action game, but by creating their own deck of cards between battles, players can customize their arsenal and devise more powerful combos. By using cards in tandem, players can unleash devastating ?sleights,? adding an even deeper layer to the combat system.

Navigating through the castle is also controlled by cards. By choosing what card to use at each castle door, players can take on more challenging enemies, hunt for hidden treasure and abilities, or visit a shop where they can buy or sell cards. The simple controls and deep game mechanics are perfect for beginners and hardcore gamers alike. Every player?s journey is different.

In addition to all the single player game features, players can take their completed decks of cards and battle against each other in link mode, proving once and for all who has the stronger deck. With beautiful graphics, high quality animation, a catchy music score and so many favourite characters, Kingdom Hearts Chain of Memories is sure to win the hearts of many new fans in Europe.

Kingdom Hearts Chain of Memories will launch on the Game Boy Advance across Europe on 6th May 2005 at the estimated retail price of around ?40.

Click onto www.nintendo-europe.com for all of the most up to date official information on Nintendo.
Companies: Disney Interactive Square Enix
Games: Kingdom Hearts: Chain of Memories