Burn rubber with Namco’s SRS – Street Racing Syndicate when it launches in Europe on Nintendo GameCube. 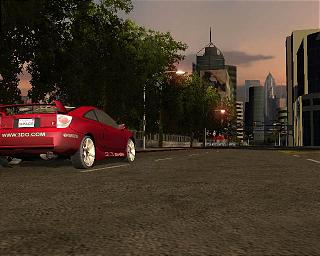 The lights are green as SRS - Street Racing Syndicate screeches onto the Nintendo GameCube in the UK on 4 March 2005. In this high-octane racing adventure players can push over forty officially licensed cars to the limits around the streets of three major US cities. SRS - Street Racing Syndicate for Nintendo GameCube will be distributed by Nintendo of Europe. Namco are the publishers and it is developed by Eutechnyx.

Players can choose from over forty performance cars, from seven well-known manufacturers, including favourites such as the Mitsubishi Evolution VIII, Subaru Impreza S202 and Volkswagen Golf VR6. To give themselves an extra edge, players can modify their car with a selection of aftermarket tuning and body-styling products. Once their ride is suitably ‘pimped-up’, players get to freely roam the streets of Philadelphia, Miami and Los Angeles in search of other street racers to challenge. Money won from racing can be used to buy more cars, better parts or simply to refill on Nitrous.

Street racing is not just about speed, it is about respect! In SRS - Street Racing Syndicate it is important that your ride is not just fast, but that it also looks the part. Officially licensed aftermarket products can be purchased to improve your car’s styling and make your ride the envy of your rivals. By clearing races and challenges the player earns respect points, unlocking more challenges and race events.

The modification system offers a huge selection of products from real tuning companies for each of the vehicles on offer. Street Racing Syndicate lets players tailor the look, performance, handling and sound of their car to suit their individual tastes. For racing fans the inclusion of the Dyno is an excellent addition to the game. The Dyno is a device enabling the player to measure the effect of any enhancements made to your car.

To earn a little extra income it is also possible to place cash bets on a race, the winner takes all. For risk-takers it’s a great way to boost earnings and feed their NOS habit, but risk too much and you could end up walking home with an empty wallet.

No street racer’s car would be complete without a gorgeous girl in the passenger seat! SRS- Street Racing Syndicate does not disappoint. As well as exploring the cities, players can complete special challenges to win the affections of eighteen girls: real models from the American cruise scene rendered and ready to reward the player’s skills by unlocking their own special videos.

With the addition of four Arcade racing modes for that quick racing fix and a two player multiplayer mode, SRS - Street Racing Syndicate is looking likely to take the chequered flag when it launches on Nintendo GameCube on 4 March 2005 for the estimated retail price of around Ł40.
Companies: Eutechnyx Namco Nintendo
Games: SRS: Street Racing Syndicate