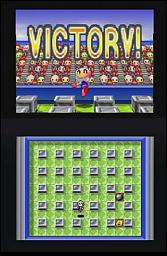 All Images (3) »
Ubisoft, one of the world's largest videogame publishers, today announces that it has signed an exclusive deal with Hudson Soft Co., Ltd, a leading developer of game and entertainment software, to publish and distribute Bomberman DS for the Nintendo DS in Europe and North America and Bomberman Hardball for Sony's PlayStation 2 throughout Europe. The latest installments of the well-known action/puzzle series Bomberman will be released on PS2 this Spring and for the DS in Summer 2005.

Fans of the Bomberman multiplayer videogame will enjoy the smooth simplicity of the original gameplay but with the enhancement of 3D graphics. New enemy characters will join the familiar ones that led to its lasting popularity. Both Bomberman Hardball and Bomberman DS will offer a novel gaming experience that leverages the capabilities of each platform while remaining faithful to the spirit of the original game.

Bomberman Hardball for PlayStation 2 innovates on the brand's classic puzzle-based bombing action with new baseball, golf and tennis games each of which has single-player and multi-player modes. A new 'life' mode tied to the PS2 system clock provides a dynamic view of your character's day-to-day activities, and side challenges allow you to customize his or her appearance. Naturally, the traditional Bomberman game can be experienced through five different 'battle' modes for up to 4 players.

Bomberman DS will take advantage of the unique features of Nintendo's new handheld console. The intense battle action will take place on both screens of the console for a wider view of the game, with players able to access and use the menu via the Touch Screen function. Leading battles by voice input will be easy with the Nintendo DS voice recognition system and microphone: just 'SHOUT' and win your battle! Gamers can also choose between the 'standard' single-player mode and 'battle' mode where up to 8 people compete against each other via the wireless LAN feature.

"With this agreement, players will be able to relive the epic Bomberman experience with the latest technology provided by the PS2 and the unique features of the Nintendo DS handheld console," said Yves Guillemot, President and CEO of Ubisoft. "We're excited to bring Ubisoft's publishing expertise to the continuing legacy of Bomberman's adventures."
Companies: HudsonSoft Ubisoft
People: Yves Guillemot
Games: Bomberman DS