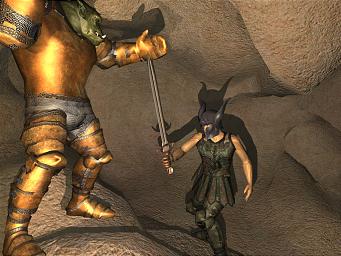 "Today we're announcing a new content strategy for EverQuest II that presents online games in an entirely new manner, like that of a television series, or serial movies," said John Smedley, president, Sony Online Entertainment. "Players will be able to unlock ongoing storylines that appeal to them, while enabling us to deliver more content than ever before."

The planned content release strategy involves a mixture of purchasable bi-annual expansion packs along with periodic releases of story-driven Adventure Packs adding new content and gameplay elements to the world of Norrath, in addition to continued updates to the game at no additional charge. The first Adventure Pack will be centered on the Dark Elves of Neriak and an unbridled evil in the tombs below the surface of Norrath. The US version of the Adventure Pack will be available to European players as well at release in English, followed by localized versions.

EverQuest II carries a monthly subscription fee of $14.99 for continuing access to the game world. Players can subscribe using a credit card, or purchase 30-day and 90-day SOE Game Cards, which open the new world of Norrath to those who choose not to use a credit card. Additionally, Adventure Packs will be included as part of the Station Access subscription at no additional charge for those accounts that have been subscribed to Station Access for at least the prior 60 days at the time of release of the Adventure Pack. Station Access includes all SOE-published games for $21.99 per month.
Companies: SOE Ubisoft
People: John Smedley
Games: EverQuest II