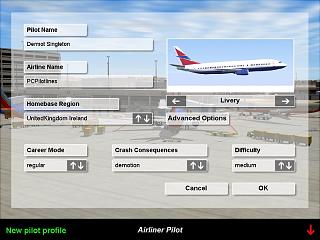 By far the most popular aircraft types with flight simulation fans are commercial airliners. It?s quite an achievement to steer a few hundred tons of metal through the atmosphere. However, for many sim pilots this feat of expertise can soon become second nature and they yearn for something more. The popularity of virtual airlines (groups of sim fans that band together on the ?net) demonstrates that simmers want to enjoy the whole commercial aircraft experience ? not just piloting a plane from A to B. Up to now developers have concentrated on producing ever more detailed airliners, scenery and airport traffic, but there was nothing to replicate airline operations, apart from management games like ?Airline Tycoon?, which lack the flying element.

Just Flight have now boldly stepped into this market gap and announced Airliner Pilot for FS2004/2002. The user is placed at the heart of a fictional airline and starts as a Junior First Officer in the right-hand seat of a turboprop aircraft and works his or her way up the pilot's career ladder. The simulated airline assigns routes to fly according to rank and aircraft allowances, and, if successful, the wannabe pilot finally achieves the coveted left seat. Airliner Pilot is being developed in-house by Just Flight and is scheduled for release in April. More details can be found at www.justflight.com
Companies: Just Flight
Games: Airliner Pilot