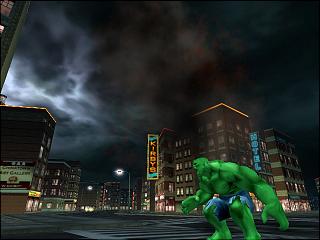 Vivendi Universal Games (VU Games) today announced the development of The Incredible Hulk for the PlayStation 2 computer entertainment system, the Xbox video game system from Microsoft and Nintendo GameCube. Developed by Radical Games, creators of the critically-acclaimed The Simpsons: Hit & Run, the new action/adventure game will feature the ultimate in destructible environments, an awesome Hulk-powered ability to weaponize any object and a massive free-roaming, fully interactive world.

"Our collaboration with Marvel on The Incredible Hulk will give gamers the opportunity to play as one of the most powerful and exciting characters to ever exist," said Michael Pole, EVP, Worldwide Studios, VU Games. "The Incredible Hulk will deliver unlimited power and freedom immersed in an authentic world that will engage Hulk fans and core gamers."

"We are very excited to have Radical developing this new Hulk title, continuing another blockbuster Marvel game franchise," said Ames Kirshen, Director Of Video Game Development at Marvel Enterprises. "Vivendi Universal Games and Radical are creating an interactive world where the player will have all of the freedoms and larger than life abilities of the Hulk in enormous and interactive 'sandbox' environments which really capture the essence of the character."

In The Incredible Hulk, players can jump anywhere, climb anything and smash everything -- even destroy entire buildings -- as the Hulk, the strongest hero there is! Gamers will create their own Hulk-powered weapons from anything they can rip out of the environment, unlock new moves to battle huge enemies in epic boss fights and experience deep and varied game elements by exploring free-roaming non-mission and side mission gameplay.